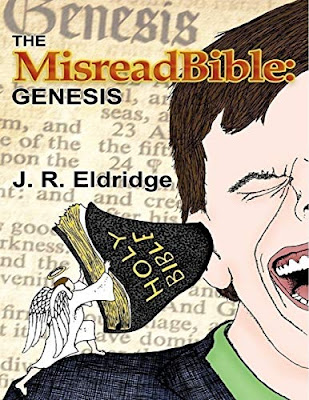 “A collection of twisted Bible tales from the warped mind of J. R. Eldridge, taking the reader on a journey from the creation of the universe to the arrival of the Israelites in Egypt in this blasphemously funny collection.

A lonely deity creates the universe in his mother’s basement and makes a little clay man who falls in love with his own rib. After the humans engage in some freaky angel sex, God decides to flood the entire world, saving only a drunkard called Noah and his family.

Once the humans have repopulated the Earth, God chooses one man called Abram, drags him from his home in the middle of the night, changes his name, and then tells him to kill his son, forming an everlasting covenant with him and his descendants.

Later, Jacob steals his brother’s birthmark, boinks his cousins, and comes up with an innovative way to breed sheep. He fathers a dozen kids including Joseph, whose brothers get tired of his dreams of grandeur and sell him to some shapeshifting Ishmaelites who take him to Egypt.”

“J. R. Eldridge is a British satirical fiction author with a fascination for religion and the absurd mythology that surrounds it. He especially enjoys poking fun at it. He began writing joke Bible verses on Twitter, and eventually moved on to writing parodies of Bible stories. He collected some of these in his book the MisreadBible: Genesis.”

If you’re a believer in the Christian God found in the Bible, stop reading. You’re done. This book isn’t for you. In fact, if you’re a devout believer in any of the Abrahamic religions, this book isn’t going to be your thing. That’s all you need to know. Move along now.

Now for you non-believers. Have you read the Bible? No, I don’t mean cover to cover. Most of the true believers haven’t done that either, no matter what they claim. Have you read a page here and a page there so you have an idea of what the writing is like? Have you been exposed to “Bible Stories” when you were a kid or in other situations where you had to just keep your mouth shut and pretend to listen, even if you thought it was a bunch of Bee Ess? Do you have a sense of humor and like satire? If so, you might enjoy or be amused by this book, to a point. I’ll explain.

Like the book this is satirizing, The Misreadbible: Genesis has a lot of genealogy (A begat B who begat C and so on) that is even more pointless here than in the original. It has a lot of contradictions where one part of the story can’t be true if a part you read earlier was true. (At least in this case, those contradictions are on purpose, at least some of the time.) I also couldn’t possibly use the word blasphemous too many times in this review. If you’re even a little bit of a believer and have chosen to plow ahead, you’ve been warned multiple times. You’ll be offended. Even non-believers may be offended. If you’re easily offended, stay away.

I found that I was amused, at least for the first several chapters. The blasphemy wasn’t an issue for me (it was a positive). The anachronisms (references to Star Wars, for example) got a chuckle, referring to Sodom as “a well-know party town” or describing characters using various forms of the F-word struck me as even more funny. But by the end some of the jokes or approaches were getting old and felt overused. I’d been amused and now I was getting bored with the concept. It was feeling too much like the book it was satirizing. As though it was never going to end. If this appeals to you and you give it a try, keep in mind that if you reach your limit and are no longer amused, you’re allowed to stop reading, or to take a break and come back and finish later. I promise, you won’t get sent to hell if you do.