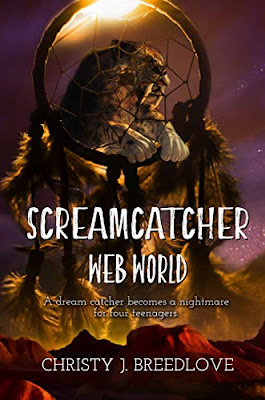 “When seventeen-year-old Jory Pike cannot shake the hellish nightmares of her parent’s deaths, she turns to an old family heirloom, a dream catcher. Even though she’s half-blood Chippewa, Jory thinks old Indian lore is so yesterday, but she’s willing to give it a try. However, the dream catcher has had its fill of nightmares from an ancient and violent past. After a sleepover party, and during one of Jory’s most horrific dream episodes, the dream catcher implodes, sucking Jory and her three friends into its own world of trapped nightmares. They’re in an alternate universe—locked inside of an insane web world. How can they find the center of the web, where all good things are allowed to pass?”

Christy J. Breedlove: “I became a story teller. I'm a diehard frantic creator of Young Adult fiction, whether it's paranormal, science fiction, suspense or fantasy. I believe in pure escapism with unceasing action adventure and discovery. If you want a moral message or cultural statement, you're apt to get a small one. But let me tell you something, reader, I want to make you laugh until you gag, cry until you're dry and tear out tufts of your hair.”

Jorlene “Jory” Pike’s parents were killed in a horrific car wreck one month ago. She is suffering from horrific nightmares of losing her parents. Her only relative is her grandfather, Albert Pike. Albert owns and runs White Feather Novelty Store. He sells Native American artifacts and novelty items to tourists visiting the Black Hills. Albert has been giving Jory tea blends to help her sleep, but they aren’t working. So he offers her a dream catcher, which she refuses, and Albert laments the passing of native ways. Jory has heard all the old stories, she is just an unbeliever.

A constant friend for the last three years is Choice Daniels. He longs to be considered a boyfriend, however, Jory clearly has him in the friend zone. Since Jory’s parents have passed her friends have made sure that Jory isn’t home alone at night, so someone always stays the night with her. Tonight is Darcy’s night. She’s a couple of years younger than Jory and a pampered rich kid. Darcy brings along Lander Cunningham since Choice was there as well. This way they could couple up playing board games and watching movies.

Oh, and while they were at White Feather Novelty Store, Choice buys Jory a late graduation present. A huge and very old dream catcher, so Jory has to accept it. Albert taught Choice the legend of the dream catcher and he agreed with Albert that Jory should give it a try. That night a huge thunderstorm moves through the area and the boys stay the night. Jory’s nightmares added to all the other nightmares this dream catcher has is too much, and it implodes. Sending these four teenagers into a dystopian web world.

The small group must work together as they are faced with nightmare challenges. They must work their way through the web of the dream catcher to find the center which they are hoping will lead them out of this hell. Jory must rely on her Native American history to unravel the web bits at a time. Choice is right there by her side to help whenever he can. Darcy is a mess, Jory does all she can to help her dig deep and find the strength to carry on. Lander is a mystery.

The story is unique and has a nice pace. The dialogue seems authentic as things spin out of control. Some of the twists I did not see coming. The ending is emotional and bittersweet.