Review: Stacey in the Hands of an Angry God by Thomas Keech 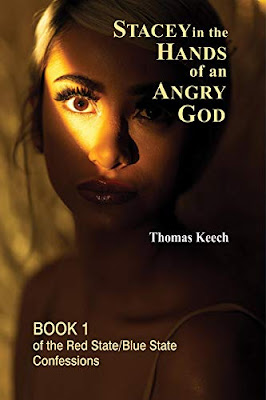 “A fundamentalist preacher with a misogynous bent gains control of the Kansas legislature and begins enacting laws to subjugate women. Law student Stacey Davenport starts a political resistance and begins an affair with an idealistic, married legislator who is holding out alone against the worst of these measures.

But as her lover’s passion for her slowly morphs into an uncontrolled jealousy, his deep-seated urge to control her overpowers all constraints of politics and religion. Only then does she realize the dysfunctional family she had scorned and avoided for many years is her only hope.”

“Thomas Keech has written four previous critically acclaimed novels dealing with state politics, teenagers entangled in suburban corruption, college romance, and a predatory physician. He sincerely hopes that this dystopian novel of fundamentalist madness is not predictive of the future. He currently lives in a very blue state that has it own problems. He hopes to visit Kansas some day.”

In the dystopian country imagined in this story, the US has become much like two different countries, the red states and the blue states, each set of states passing laws at the state level that make sense from their partisan point of view. As might be expected, with many of the reddest among us caring most about one specific issue, the red states have implemented lots of laws and regulations to prevent a potential mother from ending her pregnancy early. This goes so far as requiring a female to have documentation showing she isn’t pregnant to leave the state. If she forgets, a quick ultrasound at the airport and, if all goes well, she’ll be on her way.

Our protagonist, a law student in Kansas, takes exception to these laws. Worse, a religious zealot doesn’t think the laws go far enough and is aiming to make them even more stringent. Stacey decides to fight back on behalf of herself and her sisters.

Like all dystopian novels, this takes a current direction some people are trying to pull the world or, in this case, country in. It then imagines a slippery slope and what the world would be like if we slid all the way down that slope. Part of me had a hard time believing the premise. Slippery slope arguments are, most of the time, fallacious arguments. I wondered whether we’d ever go this far, even in those states most likely to be willing. But then I pondered how much more credible 1984 feels to me today than it did just a couple years ago, and I was suspending my disbelief, at least for purposes of reading the book. If nothing else, it should get you thinking, which ultimately is the point.