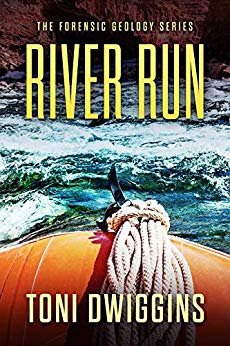 “There are plenty of ways to die in the Grand Canyon.

The only clue to the fate of the rafters is a bag of pebbles caught in the bowline. Following that clue, the geologists uncover a hellish scheme. Not only are the rafters in peril, but the river itself is under attack.

The race to stop it takes Cassie and Walter deep into the canyon, and onto the mighty river, putting their own survival at stake.”

“Toni Dwiggins is an award-winning and bestselling author. She takes forensic mystery into thriller territory, bringing her characters from the lab to outdoor adventure. She has hiked the same trails, skied the same mountains, run the same river, and kayaked the same sea as her characters -- but she doesn't get into nearly the trouble that they do.”

This is the fifth book of this series and the second that I’ve read. By virtue of the basics of the series you’re going to have some forensic geology involved. That is, after all, the name of the series. But you’re also going to have some unique outdoor settings throughout these books. In this case you’ll get a chance to explore, along with Cassie and Walter, the area of the Grand Canyon with a brief foray into the red rock area of Southern Utah as a bonus. If you’ve visited the Grand Canyon, you’ll be able to imagine what Cassie and Walter are seeing. If you’ve ever taken a ride on a raft down a river, your knuckles will turn white as Walter and Cassie run rapids on the Colorado River in the Grand Canyon. It’s a fun time.

Oh yeah. I almost forgot. There’s also the mystery at the heart of the story. What happened to the rafters who have gone missing? Figuring that out will keep you on the edge of your seat too. Just be sure to hold on tight and whatever you do, don’t take off your life vest.

Although the fifth book of a series, each book stands alone and can be read in any order.