Review: In Defense of Tax Havens by Just for Fin 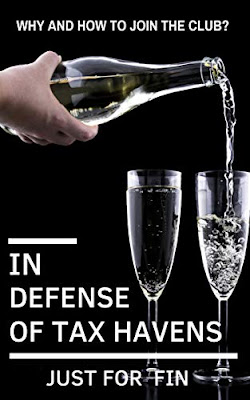 For too long, offshore tax havens have been considered a great evil. There has been a huge public outcry against the use of tax havens, following repeated whistleblower leaks including the Paradise Papers (2017), Panama Papers (2016), Swiss Leaks (2015), Lux Leaks (2014), Offshore Leaks (2013) and the Wikileaks Cablegate (2010).

In this book, Just for Fin argues there has been undue focus on the negatives, and too little focus on the many benefits that offshore tax havens provide.

Why else would they be so popular amongst the elite of our society - the rich and the powerful comprising our top politicians, business leaders, sportsmen, celebrities and more?”

If you know absolutely nothing about what a tax haven is and want to get a rough idea without having to Google to see what the internet says or needing to read too much, this book might be a way to get a clue. It’s the first of two books by the same author regarding tax havens. The author’s bio indicates his books are humorous. I’m known in some circles for my dry sense of humor, but the humor here, other than the pretension that we could all benefit from tax havens, missed me completely. I’d suggest that these two books could and should have been a single volume. As a refresher (for those who know a bit about tax havens) or a short, rough introduction (for those who know nothing) in preparation for reading the second volume, this one could have some value. Barely.