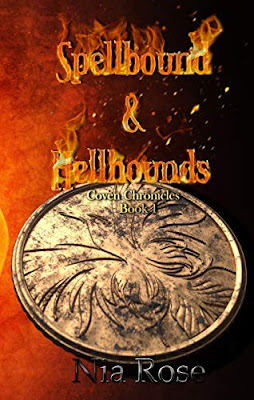 “Enter the world of Raen, turn left at the land of dragons, and you’ll find yourself in the country of Aeristria. A place overflowing with magic and creatures that were once only heard of in fairy-tales. In the heart of Aeristria is the capital city, Tolvade. Here you will find shops and taverns, laughter and fun, runesmiths looking for their next job and sneaky pickpocketing imps. Steer clear of the galloping gang of centaurs and you will see the headquarters of the prestigious Coven.

Within the Coven’s lower ranks, you’ll find Vanessa, a third-year Hunter itching to become a Spellweaver. Her and her trusted demon partner, Botobolbilian, must investigate an explosion at the academy and bring the culprit responsible in. Easy job, right?

Vanessa and her partner find that this investigation runs deep in black magic and sprinkled with feral demon summonings. With countless lives on the line, Vanessa struggles with self-doubt and following her heart (and laws) as she tries to right the wrongs of these heinous criminals and bring them to justice before they do any more harm. But, with an oncoming yearly blizzard just days away, is it too late?

Even with all the magic, spells, and power on Raen, this job might be the last that this duo ever faces…”

“I am a proud mother of four beautiful children that light up my life and home with their laughter and tomfoolery. I have one fuzzy prince, Thor, the king of the protective puppies and one handsome (if I do say so myself) husband. If I had any weaknesses it would be that I feel too much, I drink too much coffee, and that I love with all my heart. With the temper of a red-headed battle mage, the sass of a rebel princess, and the street smarts of a rogue, I live my days in the comfort of those that I hold dear and the limitless worlds that I create to share with all of you.”

You can follow Ms. Rose on Facebook and see her other books on her Amazon Author page.

Vanessa grew up in an orphanage where she had to fight for everything she had or wanted. So she has a chip on her shoulder and is hard to get to know, or like. She has been accepted into the Coven to refine her magical skills, she also lucked out big-time when she received her demon partner, Botobolbilian. Something strange happened when Botobolbilian went through the transference to become Vanessa’s demon partner. He is a huge ogre who speaks with sophistication, always has a book in hand to read, and wears a suit. Vanessa calls him Bobo, which drives him batty. He is a great character and Vanessa knows she is lucky to have him for protection.

Vanessa hopes this mission to investigate the explosion at the academy will be her ticket to move up in the rankings to be a Spellweaver. What she finds is far more than she bargained for and it ends up with her needing to be rescued from the Hellhounds. This is when we meet Leon who is her superior. Vanessa has a reputation of causing problems and when Leon and Vanessa are called to report to the Coven they decree that Leon stay with Vanessa at all times until they have investigated the Hellhound problem. However, Vanessa is like a dog with a bone and goes against the Covens orders to investigate.

The characters are all well-defined and diverse. There is a lot of action in the caves under the academy with some unique magic. Vanessa discovers that there is black magic involved. But finding who has turned to the dark side and why is a mystery. Vanessa has learned to stand by her convictions through her hard knock life. Now she needs to learn how to control her fears and stay focused to control her magic. She is a flawed character who is going through some growing pains but she turns out to be a great character to cheer for. You’ll want her to come out on top to get the respect she deserves. The climactic battle at the end is as emotional as it is physical with magic flying around in every direction. But it all comes around to a satisfying conclusion. Spellbound & Hellhounds is an enjoyable read.

★★★ The Coven Chronicles is part of a dual trilogy. Also, all books end with cliffhangers! ★★★

A small number of proofing issues, such as missing, wrong, or extra words.