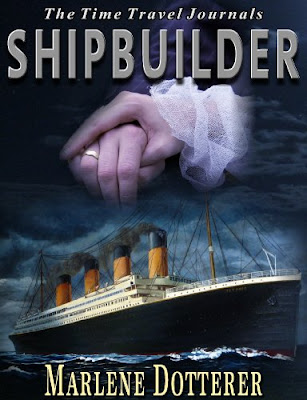 Casey Wilson, a coed at Queen’s University in Belfast, Ireland, takes a shortcut back to her dorm room when she bumps into physicist, Dr. Sam Altair. Sam’s time travel research is about to lose funding, so he feels pressure to perform one last unauthorized experiment to prove his theory. The unexpected rendezvous in the Botanic Garden leads to an accident transporting Casey and Sam 100 years back in time to 1906, six years before the launching of the Titanic.

Author, geologist, chef, and frustrated gardener, Marlene Dotterer writes “to silence the voices” due to her obsession of other worlds and other times.

Marlene Dotterer immediately engages her reader in this marvelous historical novel about the Titanic shipbuilders of Belfast, Ireland. Since her female protagonist, Casey, is 20-years-old, sexagenarian Sam takes her under his wing as his ward in this male dominated early 19th Century society. They concoct a believable backstory and begin to live in a culture about to explode over Catholic/Protestant differences.

Sam and Casey decide to write journals in a hope to change history for the better. When they meet Tom Andrews, a shipbuilder destined to help design and build the Titanic, the duo take it upon themselves to save lives.

The Time Travel Journals: Shipbuilder is one book you will hate to put down. It’s engaging characters, fascinating premise, and well-researched storyline will keep pages turning until its satisfying conclusion. The only negative about Dotterer’s book is that it ended. Fortunately, the sequel, The Time Travel Journals: Bridgebuilders is also available on Amazon.