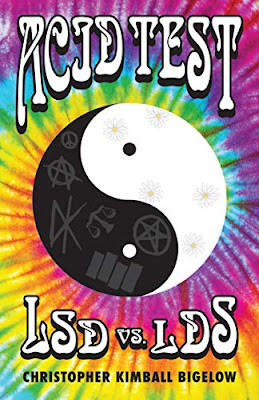 “Growing up Mormon during America’s early-1980s satanic panic, Bigelow escapes the religion’s bland conformity by playing Dungeons & Dragons. After graduating from high school in 1984, he dives into sex, drugs, and the counterculture via Salt Lake City’s punk and new-wave scenes, as echoed from London, New York, and especially Los Angeles.

As Bigelow explores the underground, he rejects myths of supernatural good vs. evil, living instead by the D&D concept of chaotic neutrality. During LSD trips, however, he starts sensing an unseen dimension. Then Stephen King’s post-apocalyptic novel The Stand gets him reconsidering good vs. evil. After an alarming otherworldly attack, can Bigelow find spiritual protection in Mormonism’s processed, regimented, corporate culture?”

A lifelong member of the Mormon church, Christopher Bigelow, a graduate of Emerson College as well as Brigham Young University, has written a lot of things about Mormonism. These have ranged from the serious, cowriting the reference “Mormonism for Dummies,” to the not-so-serious, for example “The Sugar Beet” which he describes as a “satirical Mormon newspaper.” The oldest of ten kids, Bigelow lives with his wife and five kids in Provo, Utah.

Memoirs are an interesting beast. Sometimes the value comes from comparing the life and experience of the memoirist to our own totally different life. That’s a positive in the insight it can give into the lives of others. I suspect the vast majority of people reading this review and considering reading the book would fit in this category. Unless you’re of a particular age, plus or minus a few years, grew up in Utah, or grew up a Mormon, this is where you’d fit. It’s a unique time and a unique culture that to someone who has always lived in Texas, New York or Florida may well feel like a foreign country.

The other way things can go with a memoir is to realize that the memoirist’s life has some similarity to your own. In that case I think the value comes from comparing and contrasting your personal experiences with that of the author. If they react to a situation differently than you would you’ll hopefully get an answer to your question of “what was he thinking?” You’ll also be able to observe how that decision turns out.

I fall solidly in this latter group with minor differences. I’m a few years older. I have a few (but very few) less siblings. I’m only a distant relative of one of the big-name Mormons of the two he mentions being a part of his ancestry. Last, most of my childhood was spent living a few towns north of the author’s, but my last year of high school was just a few miles west of his house, on what he’d describe as the poor side of town, but in reality was solidly middle class. (I’ll resist saying bad things about Bountiful High, but it’s hard.) I was even enrolled for a period at the same University in Salt Lake as the author attended just out of high school with an attendance record that was as spotty as his.

All of that is a long setup to say that while I never ingested the recreational pharmaceutical implied in the book’s title, I sure felt like I was having a lot of flashbacks while reading this book. That might be the mention of a specific business (the infamous Bill and Nada’s Diner or Salt Lake’s head-shop-of-choice at the time, The Cosmic Aeroplane) or the author’s description of certain Mormon rituals. What I semi-jokingly refer to as my Mormon PTSD was triggered more than once, most often when Chris’ dad would try to get him to come back into the fold. I can’t imagine anyone who grew up in this culture and struggled with it, regardless of the outcome, wouldn’t have flashbacks of their own. It sure brought back memories. At least one or two were even good.

Having read the author’s bio, I knew how it was going to turn out in the end. I found that this knowledge had an effect on my reaction to certain things in the story, knowing that he was thinking something at the time, but that he’d change his mind later. This was absolutely due to my personal bias. Someone else might react differently or not at all, depending on their particular point of view. I also thought there were a few instances of things being mentioned in a way that added to the story, if a person was familiar with Mormon culture, but weren’t explained so that those not clued in might not even understand what was going on or its significance.

Ultimately, I can see anyone potentially finding this an interesting read. The best fit would be a fifty-something devout Mormon who had a short rebellious period as a kid, who will have flashbacks like I did, but be more in tune with the ending. Those people of the same age who grew up in Texas, New York, etc. will have a fun time comparing and contrasting. Some of you younger kids (that’s those of you in your thirties or forties) might have a fun time laughing at life in the olden days too.