Review: Fire Me Up by Alicia Street 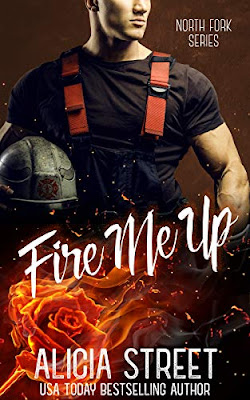 “FDNY Firefighter Harper Sheehan made a career out of saving others, so how could he forget the small, determined woman who shoved him out of the path of a careening car that would have taken his life. Not that quiet schoolteacher Marni Ross has an easy time forgetting him either. But she knows a handsome hunk like him would never be interested in someone like her. When Harper loses his fiancée to a rich Wall Streeter and seeks a new start in a sleepy village on the North Fork, he runs into the same woman who once again surprises him, this time shaking up his world like never before.”

“Alicia Street is a USA Today bestselling author and a Daphne du Maurier award-winner. She writes both sweet and spicy romances and sometimes collaborates with her husband, Roy. She spent many years as a dancer, choreographer, and teacher. A compulsive reader of every genre, Alicia loves watching old black-and-white movies and inventing new recipes for soup.”

To learn more about Ms. Street you can visit her at her web site or on Facebook.

Marni Ross seems like a mild mannered second grade school teacher, however she is anything but that. Harper Sheehan, a New York Firefighter, is in the midst of changing his career for his fiancée. He thought she wanted a less stressful life for them so they could settle down and raise a family. So he leaves his position as a New York Firefighter and buys a partnership with his Uncle Phil who owns a bar and seafood grill, The Blue Albatross Tavern, in the peaceful seaside community of North Fork. But firefighting is in Harper’s blood and he joins the volunteer fire department and other out-reach classes on fire safety. His fiancée thanks him by breaking their engagement for another man.

Marni and Harper have chemistry going for them, however, both are reluctant to give in to it. Harper’s recent breakup prevents him from moving too fast, he doesn’t want to scare Marni away. He already has a cottage in which he can see his dream of a family come true with Marni. Marni’s abusive ex-husband prevents her from developing any relationship beyond friendship with any man, but her blood boils when Harper is near. It’s exhilarating to watch their relationship develop, Marni is full of surprises. Then it’s heartbreaking to watch pride and misunderstandings complicate their journey. Thank goodness Harper has Uncle Phil to mansplain Marni’s behavior to him. Uncle Phil became a surrogate father to Harper when his own father died firefighting when he was fourteen.

Then all bets are off the table when Marni’s ex-husband shows up in town. Tension and emotions run high when Harper’s protective instincts go into overdrive. If you like a bit of suspense in your romantic stories this may be right up your alley. Fire Me Up is an enjoyable read.

Fire Me Up is book 1 in Ms. Street’s, North Fork Series.

Nothing significant in proofing or formatting.

Thanks so much for your insightful and succinct review of Fire Me Up.

Thank you for dropping in and commenting, Ms. Street.