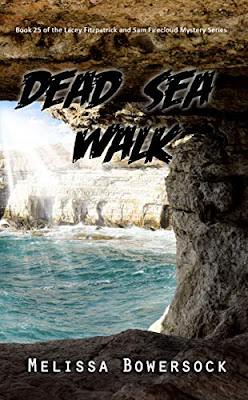 “In 1947, the first Dead Sea scrolls—parchment containing 2,000-year-old versions of Biblical text—were discovered in caves above Qumran, Israel. Archaeological study of Qumran suggests it was a community of Essenes, ascetic monks whose teachings influenced the earliest Christian thought. When medium Sam Firecloud is invited to walk the ruins to connect with a spirit there, he wonders what—or who—he’ll find. The executive director of Qumran has a guess; he believes the soul who dwells there could be no less than the ghost of Jesus Christ.”

Dead Sea Walk surprised me. I was expecting a bunch of religious gibberish that was going to go in one ear and out the other as I rolled my eyes. That is not what I got. Now when your name starts being bandied about by brainy billionaire buddies, you can be sure that you’ve made a name for yourself. Which is how Sam and Lacey Firecloud end up in Qumran, Israel at the request from Alec Mainville, the executive director of Qumran archaeological study.

Mainville admits his two passions in life are the Bible and archaeology. Mainville is in charge of the recovery efforts going on in the caves which held the Dead Sea Scrolls, and the ruins of what is believed to be the community of Essenes, ascetic monks whose teachings influenced the earliest Christian thought.
Mainville not only wants to piece together the physical history of the area, but the metaphysical as well. He wants to explore the spiritual energy that surrounds the area. He has had other psychic’s report that there is a spirit tethered there and who they think it is. Mainville has been told by Cameron Gregory, an astrophysicist, who has his own story in Gangster Walk (book 14) that Sam has the honesty and integrity to tell him the truth and will settle the matter once and for all.

The story that develops is fascinating. Ms. Bowersock is a master storyteller who knows how to draw the reader in and keep them enthralled. Sam Firecloud agrees to try a new method as the spirit is fading and not just because it is an old spirit. This twist surprised and delighted me. Don’t miss this book, I bet you will be as amazed as I was.