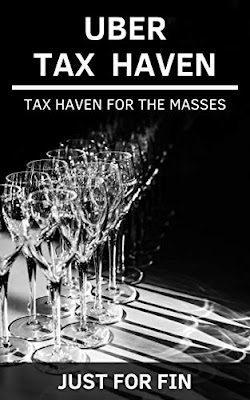 “Why should you continue to pay taxes, when the rich and the powerful do not? This is clearly unjust and blatant discrimination, that leads to the masses having to pay extra taxes to subsidise the rich who don’t pay their fair share.

Tax havens are wonderful places that allow you to avoid paying taxes on your income or wealth. Not having to pay taxes is a wonderful feeling! Why should this remain the sole privilege of the rich and the powerful?

Uber Tax Haven MNC presents an unconventional, yet practical and implementable, plan to help address this issue once and for all.”

In the first (very short) volume of this series the author gave an explanation of what tax havens are and an introduction into how they work. At least a minimal understanding of tax havens could be of use in fully understanding this second volume, but probably anyone who knows enough to be attracted to this book would know enough to get the gist of it.

This book proposes a way to shelter basically everyone’s income in the same way that the rich, powerful elite in the world do. In his or her bio the author says their writing is humorous and I’ve got to admit, reading this did make me laugh. Some of those laughs were probably in places where the author intended humor. Some of it (like that it would work if we all did what he or she proposes) maybe is serious, maybe not. I laughed at that, regardless of intent.

However, I did find this volume much more worthwhile than the first book because it admits that regardless of where a person falls on the political spectrum that some of the things government currently provides need to be provided and that the government requires revenue to do it. It then proceeds to outline where that money could come from instead of the income tax that would be going away in the fantasy this book is painting.

While I think the author probably realized that a consumption tax (one of the proposed revenue generators) should not be on food, with the exception of some food taxes explicitly applied for specific reasons discussed in the book, this was never spelled out. I think it should have been. In the US most people when thinking of a consumption tax immediately relate this to state sales taxes where in some states this is not applied to food and in other states, where it is, an increase impacts the poor much more than the rich. But other than that nitpick, the ideas and concepts he introduced in his proposals for how governments might maintain their revenue, but in a way the author thinks are better was, if not always convincing, generally thought provoking.