Review: Ravens’ Will by Terry Graves 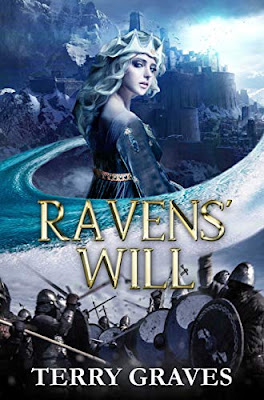 “A fairytale retelling of Hans Christian Andersen’s The Snow Queen, reimagined as an epic Saga during the Viking age.

Old prophecies of the Norse say that, before Ragnarök, a great winter will fall upon the world.

The gods have been defeated and vanquished from the Nine Realms. Skaði, the Snow Queen, is the last line of defense. From the highest peaks of Ásgarð, she protects the Bifröst Bridge and wards off the trolls and giants that try to conquer Miðgarð.

But dark omens run freely. There is word of two ravens that fly once again over the world, and fishermen have seen the scales of a giant serpent slithering under the waves of the sea. The song of winter that Skaði sings every night is slowly dying away into nothingness. And when the Snow Queen’s power finally falters, the winter will end and Ragnarök will begin.

Meanwhile, Gerda has been living in the small village of Veraheim for all her life. The daughter of a swineherd who loves to drink and tell tall tales, Gerda dreams of traveling far away and performing mighty feats, together with her friends Kairan, Runa and Alarr.

She has always thought this was an impossible dream... until she finds the giant trapped under the ice of the frozen lake.”

“Terry Graves is a pen name for Victor Selles, a Spanish writer. He has served coffees for a living and cleaned and prepared dinosaur fossil bones just for fun.

Under his real name, he has published a dozen short stories in different Spanish anthologies and magazines… He has translated Lucy Clifford's, The New Mother into Spanish, has written scripts for two short films and has won a couple of literary competitions. He is proud to say that some of his work has been rejected by both Granta and 2000 AD magazines.”

To learn more about Mr. Graves check out his blog, or his Facebookpage.

Ravens’ Will begins with a prologue to set the stage for the story proper. It’s full of Old Norse terminology, and names that made my head spin. Luckily there is a detailed glossary at the end of the book. The prologue seamlessly turns into a bedtime story being told by a grandmother to her two young grandchildren.

The story centers around four loyal twenty something friends who have grown up together in the small village of Veraheim. Gerda, Runa, Kairan, and Alarr have diverse family histories and distinct personalities. When Gerda discovers a giant frozen under the ice in a local lake not too far from their village … well, you have to put on your fairytale hats here. The giant was just discovered in a lake they ice skated on as kids year after year. Not only that, but the giant has been frozen there since the war between the Gods and the Giants, which happened hundreds if not thousands of years ago. At any rate let’s say it was time for him to be discovered and so he appeared there. That works for me in a fairytale.

So now the tale takes off, following a few poor decisions made by the group. Or let’s say by Gerda, okay? As a result the giant is awakened and then set free. Now the quest begins to free Kai from the Snow Queen’s fortress in the far north across the Bifröst Bridge.

The plot is detailed and as twisty and turny as a roller-coaster ride. There are treacheries and conspiracies afoot, along with witches, magic, giants, and trolls. The winter travel is grueling with poor provisions. Runa has to make a difficult decision and Gerda feels betrayed.

As this story comes to a close there is word of two ravens that fly once again over the world. All four of the friends are scattered around the countryside. Kai may be mostly dead, but not dead dead. Gerda is trying to survive in the company of trolls. Runa has run off with the witch to learn her craft. Alarr seems to be a pawn in a conspiracy to overthrow the king.

Old prophecies state when the Snow Queen’s power finally falters, the winter will end and Ragnarök will begin. The author does a good job weaving together five story arcs in this epic saga. Now the stage is set for more story as winter seems to be coming to an end.

Ravens’ Will is book 1 in Mr. Graves, The Snow Queen Saga.

A small number of proofing misses such as missing or wrong words. Nothing that threw me out of the story.