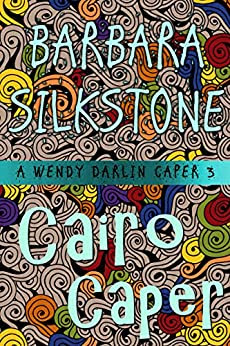 “Wendy Darlin joins her archaeologist boyfriend, Professor Roger Jolley, in a quest across Egypt looking for a lost artifact for the Egyptian Antiquities Society that will assist them in locating Antony and Cleopatra’s burial tomb. All they had to do was get from Cairo to the Temple of Taporisis Magna alive. However, not everyone is who they say they are and they find themselves running for their lives.”

Barbara states on her blog, “My writing history began humbly enough when I started an underground newspaper in Catholic grade school. I was threatened with excommunication by the nuns so I went further underground. I’ve packed many adventures into my life excusing even the disasters as ‘material for my next book.’… I enjoy doing playful things with language, blending two distinct words to create a new word… I now write criminally funny fairy tales ripped from the headlines… shaken, not stirred, and served with a twist and a chuckle.”

This is Ms. Silkstone’s third novel in her Wendy Darlin series. She has three other comedic mystery books along with her “true fiction,” The Adventures of a Love Investigator, 527 Naked Men & One Woman. Silkstone contributed to the anthology Indie Chicks and The WG2E All-For-Indies Anthologies: Spring Hop Edition. Her books are also available on Audible.com. You can connect with Ms. Silkstone at her new blog although she’s been messing with us by posting recently on her old blog, too. Her facebook page is yet another option. I also feel like I should add that Ms. Silkstone hosts The Second Act Cafe that is dedicated to getting even by having fun.

The non-stop action starts in the first chapter with Wendy hurling a large glass ashtray, the only weapon she could find, into the nose of an assassin on their sixth floor hotel room balcony in Cairo, sending him toppling over the railing. His body apparently disappears from the sidewalk and Wendy and Roger are followed on a comedic run through a crowded Egyptian market place. Poor Wendy, she is one smart gal and very capable, but things just seem to happen to her. Unsurprisingly, Wendy soon becomes instrumental in being able to fulfill their quest.

With the addition of characters like Habib, Petri Dische, and librarian, wannabe-author Fiona Feelgood, who was looking for her own Egyptian treasure and material for her book Erotica for Dummies, put me in mind of Silkstone’s own true fiction book, The Adventures of a Love Investigator. Then there is the mystery of who is legit and who is involved in the antiquities black market. The way Ms. Silkstone plays with words is unrivaled and the way she incorporated segments from favorite movie clips was genius. She uses sharp wit throughout her stories, her plots are strong, and the action nonstop. I really enjoyed reading about Wendy and her tomb raiding adventures and hope to see more of Habib and quite possibly Tickemoff, the friendly street peddler, in future Wendy Darlin books.

This story stands on its own, and is young adult appropriate.

No issues with editing or formatting.