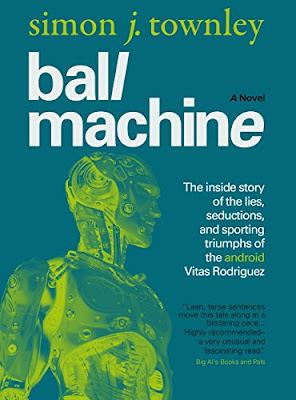 Rosa Rodriguez, the only woman among a team of technical geniuses, yearns for a partner to match her at tennis. None of the nerds can comply, so she persuades them (in a very unique way) to help her build a tennis-playing android. The story follows the android’s journey as he develops physically and mentally until he’s finally faced with a very human decision.

Simon Townley has somehow scratched a living as a freelance writer for nearly twenty years.

“He is the author of the acclaimed slipstream / speculative novel Lost In Thought and has written a range of cross-genre novels for both adults and young adults, including prehistoric fiction series A Tribal Song - Tales of the Koriba. The first novel in the series, The Dry Lands, was published in 2012, with the second, In the Rattle of the Shaman's Bones, scheduled for release in early 2014. His dystopian sci-fi thriller Outlivers, again written for both adults and young adults alike, was released in autumn of 2013.”

As Al recently pointed out, the purpose of a review is to help others decide if a story is appealing to them. So, I’ll start with a negative. If you don’t understand and enjoy tennis and soccer, you probably won’t enjoy this book. But before you skip to the next review, I do recommend taking a look at another work by this author. I read and reviewed Lost in Thought last year and loved it (and not a soccer or tennis ball in sight).

Disclaimer over. This is a terrific read. Gosh, Mr. Townley can write his little socks off. Lean, terse sentences move this tale along at a blistering pace. Crazy concepts presented so succinctly that even wild stretches of the imagination seem not just possible, but obvious—of course these geniuses could build a totally lifelike android in a couple months—duh! Of course his penis would work (now if that doesn’t get you clicking download from Amazon, I don’t know what would!)

The story, or rather the character arc, because this is all about Vitas, the android, is full of subplots and interesting secondary characters (I particularly enjoyed Ng), but never confusing. In fact, the book’s full title is: Ball Machine - the Inside Story of the Lies, Seductions and Sporting Triumphs of the Android Vitas Rodriguez. I think that describes the plot very nicely. Until the very last page, I didn’t know how things would finish for Vitas. I did enjoy the ending, but it’s a credit to the author, that I would have enjoyed the other alternative, too.
Highly recommended--a very unusual and fascinating read.