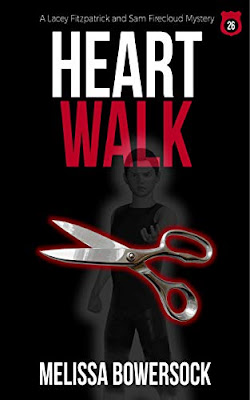 “In an older LA neighborhood, a nearly eighty-year-old house is haunted by a very persistent—and threatening—ghost. Multiple efforts to convince the ghost to move on have failed. When medium Sam Firecloud and his partner Lacey Fitzpatrick are called in to take a stab at it, they quickly realize there is more to the story than they know. The only question is, can they unravel the mystery before the enraged ghost takes out its revenge… on them?”

“Melissa Bowersock is an eclectic, award-winning author who writes in a variety of fiction and non-fiction genres: biography, contemporary, western, action, romance, fantasy, paranormal and spiritual. She has been both traditionally and independently published and is a regular contributor to the superblog Indies Unlimited. She has a tattoo on the inside of her left wrist that says IMAGINE. In her next life, she plans to be an astronaut. She lives in a small community in northern Arizona with her husband and an Airedale terrier. She also writes under the pen name Amber Flame.

Due to extenuating circumstances Sam Firecloud and Lacey Fitzpatrick require a different approach to appease the angry spirit in Heart Walk. Sonya Nakashita is at her wits end with a threating manifestation in her sewing room. She’s had a psychic who tried crystals and banishment spells with no luck. Madam Rubinskya recommended an exorcism, which also ended in failure. Through Lacey’s research she’s pretty sure she has found the spirit’s name, but they need to learn his story.

In the meantime it is family weekend, Daniel has a new girlfriend named Chelsea. She joins the family for pizza and then they all go back to Sam and Lacey’s apartment to watch a movie. Chelsea picks Poltergeist and asks if ghost stories were okay for them. Hahahaha, poor thing doesn’t have a clue. However, she finds it all fascinating. I love watching the antics that go on during family weekends. Sam and Lacey agree that Daniel needs to learn some dating etiquette.

As the pieces start coming together the twists turn disturbing and unsettling. Ms. Bowersock knows how to weave a tangled web of deceit to keep the tension high. Getting to the truth of this angry spirit who wants revenge is a whirlwind of emotions. The climax is startling and deplorable.
Heart Walk is a captivating story, and not to be missed. I love the way that each book is fresh and unique unto itself.

Thank you, Ms. Bowersock for dropping in and commenting.