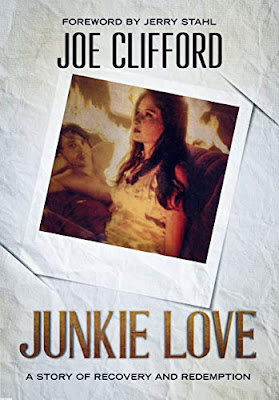 Junkie Love portrays the author’s existence as a drug addict.

Joe Clifford is acquisitions editor for Gutter Books and managing editor of The Flash Fiction Offensive. He is the author of three books.

This is one hell of a book. It reminds me of another I reviewed, Just Like That by Les Edgerton. The subject matter is entirely different, the parallel lies in the incredible honesty that both authors apply in their work. In Junkie Love the author charts his decline from light drug user to utterly messed up waste of space and then recovery. I truly struggle to understand how Clifford actually survived.

The writing style is interesting and unusual, a mix of past tense flashback chapters in the past tense interspersed with others in present tense. It’s unfair to say the narrative is confusing, the thread does move about, but it conveys the mental state of a junkie. We’re not talking lucid here, memories are jumbled for the straightest of people, never mind those who spend most of their times either high or hunting down their next fix.
The author is incredibly blunt about the life he led, the places (dumps really) he lived (like Hepatitis Heights) and the things he did to survive. I doubt 99% of the population would never experience anything like the events in Junkie Love.

I didn’t last long. Like every other job I’ve ever had, I was fired from this one, too. As the summer nights grew shorter, my heroin problem grew worse, and a quarter gram of speed just wasn’t enough to drag me from the other side of town fast enough, especially if I was chasing down smack. Heroin first, speed second, cocaine third and then the other stuff like food and shelter. That was my hierarchy of needs.

Then there are the supporting characters. Minor ones with nicknames (e.g. Gluehead) come and go but there are a handful of constants – the author’s wife, Catherine, who has serious mental health issues and is dealt with in the past tense chapters, Amy a junkie girlfriend in the present tense and his family who are in both. Ultimately almost all these relationships fade, only the author’s family is there at the end (remarkable given what he put them through).
Here’s an example of the writing, and one of the characters:

Oksana was boiling cat heads in a big pot on the stove when I got back to the apartment. Oksana collected road kill, cooking off the fur and using the bleached bits of skull as jewelry. A homeless, teenaged speed dealer, she’d race the midnight streets of San Francisco on her skateboard, a demon pixie draped in shiny beads and necklaces delivering product, two giant guard dogs snapping at her side like the Hounds of Hell.

Swearing. Copious references to drug use.