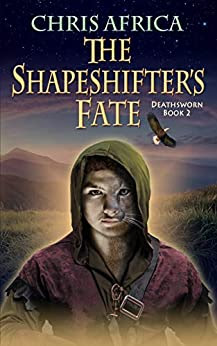 “Spring fever has struck after a snowy winter in Death's End. The friends head out on a risky mission in Lyesfare, a known hotbed of activity by the malevolent Wizards of the True Faith.

Loaded up with enchanted artifacts, revived energy, and last summer's experience to aid them, they are joined by allies new and old. Prophecies will be fulfilled, and heroes will rise on the side of magic.

Someone told me once that I have a superhero name, and I love that description so much that I repeat it as often as possible. (Superhero Name.)…

I also have a Political Science degree, decades of web project management experience, and a successful job at a digital agency. I live in Michigan with my husband, Mike; daughter, Olivia; cats Ninja and Artemis; and Harvey the dog.”

To learn more about Ms. Africa check out her blog.

What an interesting world these characters live in. I got the feeling it was an old world setting, but full of magic in unexpected places. The magical people would happily remain hidden. The tale centers around three main characters. Chassy, a sixteen year-old whose magic hasn’t revealed itself yet, his best friend Nita, whose magic is so strong it tattoos her skin, and her older brother Andrev. They left their homes in Waet Tree Village, the only place where wizards are naturally born, seeking adventure last year. Apparently they had one in book 1, which I haven’t read. I think the author did a nice job filling in the backstory when needed. After spending the winter recuperating at the cleric Xander’s home in Death’s End, they are anxious to get back to their adventure. Except for Andrev. He spent the whole winter in Xander’s library reading books. He came across one full of blank pages and told it was written in the old god’s language and he is not wise enough to read it yet.  So he’s not ready to leave the library. However, he is reluctant to let Nita leave without him.

The next adventure awaits them when they enter the township of Death’s End to pick up things from the marker. The plot gets all twisted up, and new characters are brought into the mix. There is also a Prophecy looming over our three heroes. Most of the story is fast-paced, until the author slows things down as to enter into a character’s thoughts that can go on for pages. I considered them stumbling blocks that interfered with the tale’s pace and put me to sleep. I can only suppose this book wasn’t for me because I did have trouble connecting to the characters. Chassy was an interesting character, he has some magic but didn’t recognize it as such. He collected rocks that spoke to him, he called them face stones, they shared their names with him and offered advice. Nina denied her powers and was loathe to use them. William seems to be human but is wise in his rich kid ways. Cherise is an odd character, I couldn’t quite figure her out.

This small troupe of characters sets out to take down the malevolent Wizards of the True Faith, Gnarkvetch. Some characters are not who they seem which leads to a very huge cliffhanger. I was gob smacked! I think high fantasy readers would find this series enjoyable, possibly even enthralling. However, this story wasn’t for me.

Nothing significant in proofing issues.

Email ThisBlogThis!Share to TwitterShare to FacebookShare to Pinterest
Labels: 3 star, Coming of Age, High Fantasy, YA