Editor's note: This is the second part of a Doubleshot Review. To get Judi Moore's thought, check out last Friday's review of the same book. 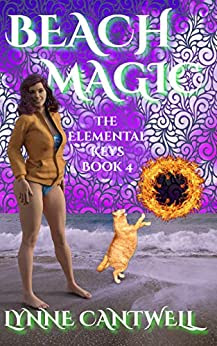 “So there we were in Colorado – me, Raney Meadows, and my three Elemental teammates. We’d just put my father and his demon keeper on ice – well, actually, on the opposite of ice – and now we had to get past a sylph to grab the final Elemental Key from its hiding place at the top of Mt. Elbert. Then, I figured, it would all be over. The demon would have only three of the four Keys he needed to open the Door to the Very Bad Thing that Could Destroy the Earth. So we’d win. I mean, you can’t open a door without all the keys, right?

Yeah, no. I should have realized it wouldn’t matter whether we had the Air Key. That demon – and whoever his Master was – would do whatever it took to open the Door of Doom, even if it meant tricking our band of Elementals into going through a portal of fire to get it done...”

“Lynne Cantwell writes mostly urban fantasy and paranormal romance, with a dash of magic realism when she’s feeling more serious. She is also a contributing author for Indies Unlimited. In a previous life, she was a broadcast journalist who worked at Mutual/NBC Radio News, CNN, and a bunch of other places you have probably never heard of. She has a master's degree in fiction writing from Johns Hopkins University. Currently, she lives near Washington, D.C. Discover

I really appreciated the preface, How We Got Here, before the story begins. So much happened in Gecko Magic that it was nice to have a recap to get me in the proper frame of mind. Things don’t slow down in Beach Magic. As soon as our team of half-elementals enter cell phone range descending Mt. Elbert everyone’s phones start pinging with text and voice mail messages. Collum’s parents text that they are headed to Los Angles, California, and Rufus is alerted by text that Annie and Auntie Helen are headed there as well. Gail also gets a text message from Ben Gelber, her work colleague, saying that he is coming to LA as well. Raney gets a few voice mails from Mam who is at Raney’s house in Malibu where wildfires are threatening the area.

Each character had a significant role to play. There are more twists, turns, switchbacks, and dimensional plane hopping that I’m not sure how Ms. Cantwell could keep it all straight. I don’t think she dropped a thread, and you’ll find surprises around every corner all the way to the end. It’s an astonishing and enlightening journey for all of our half-elemental heroes. I loved Raney’s voice in this story. She’s a strong confident woman who thinks things through, but still holds onto a few insecurities about making the right decision. She’s a great character. Perspective and intent are two of the spiritual themes that really hit home with me.

This is a fun and entertaining series with diverse characters you’ll love and a few to hate. And a very outspoken cat who will never tell you all she really knows. However, she is a finicky eater, tuna or shrimp if you please. She also likes a clean litterbox, but honestly who wouldn’t?

I was given an Advance Readers’ Copy, so I can’t comment on the final product.

Thank you very much for the awesome review!

(I put Tiger in charge of keeping the story lines straight. Which probably explains a lot, come to think of it. ;) )

LOL! Tiger is a great character, I loved that she exuded royalty. So much attitude for her size, but that's cats for you! I can see these characters coming together for another mission.