Review: Hands Up by Stephen Clark 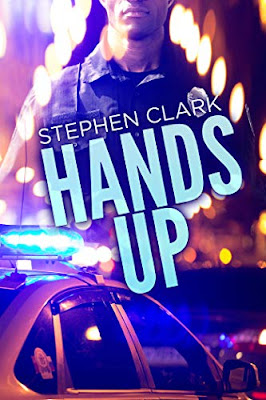 “Officer Ryan Quinn, a rookie raised in a family of cops, is on the fast track to detective until he shoots an unarmed black male. Now, with his career, reputation and freedom on the line, he embarks on a quest for redemption that forces him to confront his fears and biases and choose between conscience or silence.

Jade Wakefield is an emotionally damaged college student living in one of Philadelphia’s worst neighborhoods. She knows the chances of getting an indictment against the cop who killed her brother are slim. When she learns there’s more to the story than the official police account, Jade is determined, even desperate, to find out what really happened. She plans to get revenge by any means necessary.

Kelly Randolph, who returns to Philadelphia broke and broken after abandoning his family ten years earlier, seeks forgiveness while mourning the death of his son. But after he’s thrust into the spotlight as the face of the protest movement, his disavowed criminal past resurfaces and threatens to derail the family’s pursuit of justice.

Ryan, Jade, and Kelly–three people from different worlds—are on a collision course after the shooting, as their lives interconnect and then spiral into chaos.”

A former award-winning journalist, Stephen Clark grew up in the suburbs of Philadelphia and now lives with his family in Northern New Jersey. He is the author of one other novel, Citizen Kill.

In many ways this book was not at all what I expected. Obviously, the shooting of Tyrel (the “unarmed black male”) and its aftermath are the majority of the story. I expected to have my thoughts get provoked, seeing possibilities in this kind of situation that I had never thought of previously. I wasn’t sure whether I’d think Ryan (the policeman who shot Tyrel) was getting a raw deal or be pulling for him to get locked up, but I was convinced it would be one of those. Given those choices my thoughts never had a chance to solidify on one or the other. Things were never that clear cut. (Maybe more like real life?) The story kept taking directions I’d have never predicted right up to the couple unexpected twists at the very end.

At points in the story I questioned how realistic certain parts were, but then managed to stifle my disbelief and keep on reading. And yes, it got me thinking around some of the social issues of the day as I expected, but instead of making me think I’d found answers, it helped me realize that this kind of story can be more complicated than it appears. In the end this was an interesting, entertaining, and yes, thought-provoking read.