Editors Note: This is the second half of a doubleshot review. Today we'll see ?wazithinkin's thoughts on this book. In case you missed it, our prior review gave Judi Moore's views on the same book. 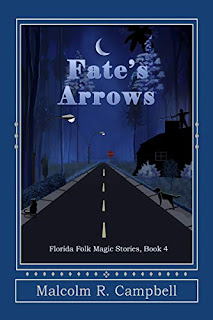 “In 1954, the small Florida Panhandle town of Torreya had more Klansmen per acre than fire ants. Sparrow, a bag lady; Pollyanna, an auditor; and Jack, the owner of Slade’s Diner, step on fire ants and Klansmen whenever they can while an unknown archer fires fate-changing arrows at the Klan’s leadership. They are not who they appear to be, and while they take risks, they must be discrete lest they end up in the Klan’s gunsights.

When Julia and Eldon, a married couple from Harlem, New York, run afoul of the Klan because of Eldon’s pro-union stance at the sawmill, they find themselves down at the ancient hanging tree where two policemen, hiding their identity beneath white robes and hoods, are the ones holding the noose.

Meanwhile, Sparrow seems to have disappeared. When the ne’er-do-well Shelton brothers beat up the Klavern’s exalted cyclops because they think he harmed Sparrow, they, too, find themselves the focus of a KKK manhunt.

Bolstered by support from a black cat and an older-than-dirt conjure woman, Pollyanna persists in her fight against the Klan, determined to restore law and order to a town overwhelmed by corruption.”

He grew up in the Florida Panhandle, a wondrous place often called “the other Florida” and “the forgotten coast,” that was the perfect environment for growing up and learning about writing and magical realism.

Campbell lives on a north Georgia farm with his wife, Lesa, and their two cats.” He dreams that one day their menagerie will include two miniature burros, and a couple of fainting goats for his wife, Lesa.

The blurb for Fate’s Arrows says it all. The plot moves at a nice pace and the twists and turns pack lots of surprise. Tension runs high as the Klan exerts their power over the town of Torreya. The archer is an unknown entity fighting the good fight but never killing. Pollyanna is a different story, she can be deadly when pushed to her limits.

Torreya is a tangled web of corruption and Klan members. However, Rudy Flowers, the chief of police, is a good man as well as some of the business owners around town. The problem is they are outnumbered by the Klan and it doesn’t take much to get your name on the short list.

I loved the talk Willie had with Eldon. Wise words were spoken, I’m just not sure the advice hit the mark as deeply as they needed to go. Old habits are hard to break.

Eulalie is feeling her age, but does what she can to bolster Pollyanna with her fight against the Klan. And Lena is ever present to keep Eulalie and Pollyanna apprised. Lena is the best secret agent ever.

The ending I did not see coming! You think you know somebody then BAM, right out of left field it knocks you for a loop! I found Fate’s Arrows well told with several threads woven together to make it an encompassing tale of the era. It’s raw and fraught with danger. The Klan may operate differently these days, but it is still alive and well.

Fate’s Arrows is book #4 in Malcolm Campbell’s, Florida Folk Magic Stories. Brace yourself, there are a few F-bombs dropped, and racist language.

A few more proofing errors than I like to see in this length of book. Mostly missing letters that change a word, extra words, or wrong words.