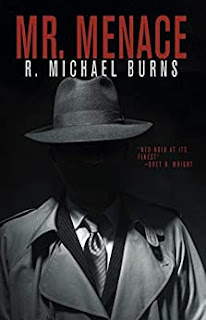 “When a mysterious woman begs detective Frank Orpheus to help her find a missing person—herself—he is intrigued on more than just a professional level. The perplexing puzzle of his client’s lost memory is the most interesting case he’s gotten in years…and the fact that she’s rich and gorgeous doesn’t hurt his enthusiasm, either.

Despite dire warnings from his devoted and prescient secretary Cass, Frank takes the job. But even as his fascination with the mysterious Lady in Gray flares into passion, Frank finds himself drawn into a shadowy underworld populated by devilish dilettantes and notorious criminals…all of them the puppets of the cryptic crime lord known only as Mr. Menace. A man who traffics not just in drugs and booze, but—possibly—in souls.

As Frank uncovers the clues that might lead him at last to lost identity of the Lady in Gray, he learns that her world holds dangers far more diabolical and deadly than knife-wielding thugs and insidious criminal syndicates.  Frank’s obsession with his strange client could get him and the people he cares about killed— or worse. The closer Frank gets to finding the answers, the more he suspects that the truth might be too terrible to live with. Just who—and what—is this woman he’s fallen for?

And how hard, and how far, will he finally fall?”

“R. Michael Burns is an October child and Colorado native with a background in theater, creative writing, philosophy, and other dark arts.  He has published short stories in the horror, science fiction, fantasy, and mystery genres, as well as the horror novel Windwalkers. After earning degrees in English and Philosophy, he taught for the better part of five years in Japan, both in public schools and in a private English conversation school.  During that time, he traveled extensively around southeast Asia. Three of his Japan-based fantasy tales have appeared in Heroic Fantasy Quarterly's Best Of anthologies, and his articles on the craft of fiction have been recognized by Predators and Editors and are taught in several college creative writing courses.  He currently resides in Florida where he teaches English and coaches his school's speech and debate team.”

One thing I can say about this book is that it is different. In many ways I’m not sure quite what to make of it.

It starts out not unlike a typical detective novel. A private investigator, Frank Orpheus, has a potential client come to his office with a need that is outside the realm of his typical cases, things like finding out if a spouse is cheating or someone is attempting to defraud their insurance company. In this case his new client wants him to figure out who she is, because she’s lost all memories. It’s like she woke up on the street with no idea of who she was or where she lived. Her clothes indicate she’s well-to-do and the pocketful of large bills she has to pay him indicate she’s not just a mentally ill homeless person, but the vibe he’s getting is strange. His secretary tries to convince him to not take the case, but he’s curious and, if we’re going to be totally honest, that he finds her attractive figures into his decision to take this on.

When this story is taking place isn’t obvious. Going in I assumed it was contemporary, but various anachronisms that popped up (things like landline phones and phone booths, taking pictures using film, or not using modern technology of any kind at any point where they’d obviously be used today) told me it was sometime in the distant (but not ancient) past, Sometime in at least the 70s or 80s, but conceivably decades earlier.

As the story goes on it gets stranger and stranger. Frank finds some of the answers he’s looking for, but what to do with that knowledge and figuring out how to get his client back to who she was mentally proves not so easy. As the story goes on it becomes darker and darker, and goes from what I’d consider a hardboiled or noir detective story into what might be termed supernatural and almost surely into the realm of horror. How everything resolves, and where our main characters, Frank, his secretary Cass, and our mysterious client, end up by the end is nowhere near what I’d have guessed as one strange twist after another led us down many different roads and extremely dark alleys to a strange finale.

Review is based on an ARC (advanced readers copy) and I can’t judge the final product based on this.