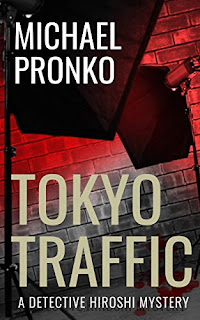 “Running from a life she didn't choose, in a city she doesn't know  Sukanya, a young Thai girl, loses herself in the vastness of Tokyo. With her Bangkok street smarts, and some stolen money, she stays ahead of her former captors who will do anything to recover the computer she took. After befriending Chiho, a Japanese girl living in an internet café, Sukanya makes plans to rid herself of her pursuers, and her past, forever.

As bodies wash up from Tokyo Bay, Hiroshi tries to find the Thai girl at the center of it all, whose name he doesn't even know. He uncovers a human trafficking ring and cryptocurrency scammers whose connections extend to the highest levels of Tokyo's power elite.”

Michael Pronko is a Tokyo-based writer and a professor of American Literature at a university there.

This was an interesting read. While it has the elements you’d want and expect to find in a crime thriller such as this, for me and probably many of those who will see this review the books like this you typically read are normally happening in the US, sometimes the UK or possibly Canada. While there are some differences in these places, the cultural differences between them and Japan, where Tokyo Traffic takes place, is significant. Those differences and how they are reflected in the story as well as how Detective Hiroshi Shimizu approaches getting to the bottom of the case made for a change of pace from your typical crime thriller. The story kept me engrossed, wondering how it was all going to shake out and worried about a few characters who were in danger throughout.