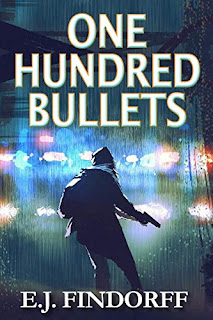 “Captain Lou Rush of the New Orleans police department is the leader of the Tribunal, a band of ten cops dedicated to eliminating the criminals that fall through the cracks of the justice system. Their success has made them powerful, and untouchable in the Crescent City, but that is about to change.

After two decades, the time has come for Lou Rush’s son Nick to join the Tribunal as aging members are due to retire. However, a fellow officer is killed by the Tribunal, and Nick discovers that his father may have also murdered an innocent man.

For years, Nick’s fiancé Cali Maddox quietly blends into the background. With an agenda of her own, her secrets will force father and son to decide where their true loyalties lie - with the Tribunal or with the love of Nick’s life, because one of them will not survive the aftermath.”

“New Orleans and all its dark weirdness laid the foundation for every story E.J. has written since high school up to present day. He was born and raised in the Crescent City, but now lives in Chicago.”

Wow. This was quite a story. Few stories keep me as on edge, unsure of what was going to happen next, pulling for the good guys (but at times not positive who the good guys really are), as this one did. Just when I’d think I had a handle on things, not where the story was going to go, but at least who was good and who wasn’t, or what was fact and what wasn’t, something would happen to show me I was wrong. Or maybe not, as what I was sure of changed, then changed back (but with more details and a more nuanced opinion). It was a great story, an edge-of-your-seat thriller, with a unique set of characters and a new take on an old premise. (A group of vigilantes taking out the bad guys has been around since the old west, or at least the westerns that pretend to be from then, right?)

So why am I raving about the great story and giving it a mediocre ranking? One of the knocks against self-publishing is that too often indie authors don’t polish their prose to acceptable levels, letting way too many grammar issues, typos, and other such things that should be eradicated prior to publication get through to the book that goes on sale. My experience has been that for the most part, this complaint is overstated. But when I do read a book that has issues with inadequate proofing, if I don’t discard it up front, if the number of issues I flagged while reading it go over a certain number, I’ll mention it and knock off stars to reflect the inadequate proofing. This book exceeded my limit. In fact, it has double the number of errors it takes for me to consider a book over the line. These are all minor (missing words, extra words, wrong words, etc) but all things that make me stumble over the sentences as I’m reading, throwing me out of the story. It’s sad when such a fantastic story is sullied by proofreading as atrocious as this.

Lots of proofing issues. Missing or extra words, wrong words, and assorted other issues. Way beyond what is acceptable.