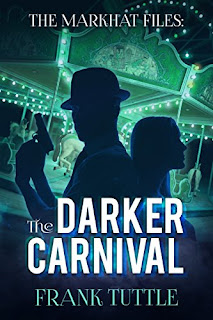 “When Dark’s Diverse Delights arrives by night to set up shows and rides that promise fun and excitement for one and all, the outskirts of Rannit begin to look disturbingly like the nightmares that plague Markhat’s sleep.

Mama Hog has sent him a new client, a cattle rancher with a missing daughter. Markhat’s search reveals genuine terrors lurking amidst the carnival’s tawdry sideshows, where Death itself takes the main stage every evening, just past midnight.

The orchestrator of the murderous, monstrous mayhem is the mysterious carnival master, Ubel Thorkel. And after Buttercup the Banshee is threatened, Markhat is in a race against time to find the carnival’s dark heart and strike it down once and for all—or die trying.”

To learn more about Mr. Tuttle’s series, The Markhat Files, and his other Young Adult series, Paths of Shadow, check out his website or follow him on Facebook.

In this seventh book of The Markhat Files, I see changes on the horizon. Markhat’s world is shifting. Characters are transforming, growing in ways I would never have foreseen. However, Markhat’s expanding abilities are not surprising to me. I think past installments of the series foreshadowed these changes. This story also introduces two new personae who will no doubt be appearing in future sequels. One mystical, named Shango the storm-sniffer, and the other a runt of a troll named Slim. Up until this story, I felt that most of The Markhat Files could be read as standalone books and in almost any order. While this is still true of the overall book, the secondary characters are gaining importance in the continuing story line and many nuances may be lost when read out of order.

If you are one to feel uneasy about carnival sideshows and clowns, you may find The Darker Carnival unnerving. What starts out as a simple missing person investigation quickly turns dark and nefarious. This is no ordinary carnival; magic compels everything about Dark’s Diverse Delights. When Buttercup is captured, it becomes personal for Markhat and Mama Hog. With Evis deathly ill and Stitches indisposed, it is left to Markhat and Mama Hog to get to the heart of the carnival and set things right again. It is a rollercoaster ride of twists and dead-ends until puzzle pieces start falling into place. Then Markhat finds himself confronted with something he never imagined he would find himself doing or having the will to carry out.

This is a game-changing installment in The Markhat Files and I am looking forward to further additions. Frank Tuttle’s books are, as always, a must buy for me.

The Darker Carnival is Book 7 in Mr. Tuttle’s series, The Markhat Files. I think this book could be read as a standalone; however, some character nuances would be missed. I don’t think that would lessen your enjoyment of this story. Original review posted March 30, 2016.