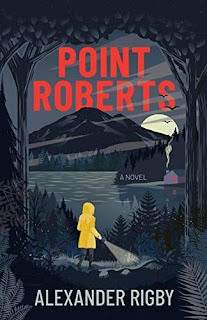 “On a peculiar peninsula in Washington State, the small town of Point Roberts exists in the shadow of the fifteen people who were murdered here. Surrounded by water and a giant wall that spans its border with Canada, Point Roberts has been cut off from the rest of the world every February for the past twenty-seven years in an attempt to stop a brutal serial killer from striking again. Because the murders took place exclusively during February three years in a row, closing down the town seemed like the only way to stop the slayings. And so far . . . it has worked.

Except the decades-old cold case remains unsolved, and the residents of Point Roberts are beginning to question if there’s an ulterior motive behind the mayor’s enforced lockdowns. After a brazen seventeen-year-old orphan named Liza moves to town, a new February begins. At first, she knows nothing of the murders, but that quickly changes when she finds a mysterious book titled The Fifteen—a book that shares shocking details on the killings.

Determined to discover the identity of the Point Roberts Slayer, Liza teams up with four other misfits who all hold secrets and have personal connections to the victims. These five strangers will have to work together to uncover the truth, if only they can stay out of the murderer’s destructive path so they don’t become victims themselves.”

“Alexander Rigby was born and raised in a small rural town in Northwest Pennsylvania. He currently lives in Seattle, Washington, with his dog, Copper Atticus, and works in book publishing. An avid outdoorsman who enjoys hiking in the wilderness, Alexander is on a mission to visit every national park in the United States.”

Unlike some place names, New York, London, and Paris for example, I’d guess the town name of Point Roberts isn’t one that an average person is immediately going to recognize. As a bit of a map and travel geek I immediately recognized the town as a geographical oddity. It’s what is called a pene-enclave by geographers. This is a piece of land that is part of one country, in this case the US, but in order to be entered by land from elsewhere in the country requires leaving the country. In this case getting to Point Roberts from elsewhere in the US and the state of Washington by car requires crossing into British Columbia, Canada and then looping back into the US and Point Roberts. A pene-enclave, unlike an enclave, could be entered other ways, in this case a boat or ferry across Puget Sound from Seattle or other points in northwest Washington or a plan or helicopter could be used without leaving the waters or airspace of the US to reach Point Roberts.

The author took the basics of Point Roberts actual existence, gave it a mayor (not reality, but easy enough to believe), and then had that mayor take some pretty wild actions based on a series of murders that happened during February, three years in a row. I’ve got to admit that my ability to suspend disbelief was stretched to the limit with much of the premise of this story, but I was curious enough to see where the story went that I forced myself to play along in my mind. I liked and was pulling for Liza and her cohorts to figure things out, there were a few twists in how things progressed that kept me guessing and changing my mind as to where things were going, and I ultimately found the end satisfying, even if it wasn’t quite what I pictured until the story got there. Last, my desire as a travel geek to some day visit the geographical anomaly of Point Roberts survived and grew stronger.

Review is based on an ARC (advance readers copy) and I can’t judge the final version.