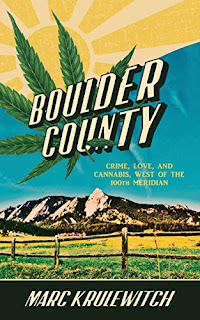 “Cannabis farmer Buddy Fisher keeps Colorado’s legalization euphoria at arm’s length. Banned from going legit due to prior felonies, he’s happy living off the radar breeding super-potent hybrids, catering to the underground cannabis culture, and watching the sun set over the land his family has farmed for three generations. But keeping a low profile becomes tricky when skyrocketing demand for his bootleg weed catches the attention of an agribusiness giant who will stop at nothing to cash in on the burgeoning marijuana market.”

Author Marc Kruelwitch and his family had lived in Chicago for generations. He was born there and set his first five novels in the Windy City. For his latest he’s moved the venue to Boulder County, Colorado where he’s lived since 1992.

It didn’t strike me until I was pondering this book, preparing to write the review, that Buddy, the hero and protagonist of the story would typically be the bad guy in many of the books I read. Certainly in a police procedural or detective mystery, he would be. But even though he’s obviously breaking the law, it’s clear that given the totality of the situation, he’s the good guy and it is only due to a few technicalities that what he’s doing is illegal. Meanwhile we’ve got characters who would be the good guys in a stereotypical story (the maybe a touch too religious sheriff from Kansas, for one) who I disliked … maybe even stronger words belong here … from the start and it went downhill from there. This story kept me guessing, both as to whether some characters were going to turn out to be good guys and how the story was going to shake out in the end. The story took me through a ton of emotions, from amusement to being on the edge of my seat to … well, you’ll have to decide how you feel about the ending yourself.