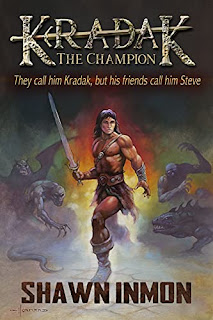 “They call him Kradak, but his friends call him Steve.

He's big and strong - an actor who plays a hero named Kradak in a series of B-movies.

When Rista and Grint come through the portal from Arkana, they don't understand what a movie is. They think Steve truly is Kradak the Champion.

They kidnap him and take him back to Arkana to help them save their world. Once they discover the truth, it is too late. The portal is closed. Steve needs to become a hero. The fate of two worlds hangs in the balance.

Rista of the Blade is a strong woman whose beauty is only surpassed by her skill in battle.

Grint is a shapeshifting goblin with a tendency toward being sarcastic.

Do they make the perfect team? Or will the bickering be their undoing?

“Shawn hails from Mossyrock, Washington--the setting for his first two books, Feels Like the First Time, and Both Sides Now.”

Shawn says he “learned everything he knows by having 400 different jobs, give or take a few… He is married to his high school sweetheart, Dawn. No one is sure why she puts up with him, as she once suffered a serious eye sprain when she rolled her eyes once too often at one of his ‘jokes.’"

Steve Montross, the actor who plays a hero named Kradak in a series of B-movies, knows his career is taking a slow nosedive. After the premiere of his latest movie in a multiplex on the outskirts on Los Angeles, he meets a couple female fans. One a petite buxom blonde named Grint. The other was tall, athletic, elegant, and named Rista. Steve feels lucky and invites them to his condo for drinks. The women stealthily add a knockout powder to Steve’s drink and haul him off to the portal to take Kradak back to their home planet, Arkana, because they need a hero to stop the darkness from devouring their planet. They actually believe Steve is the real hero Kradak, they don’t understand that Kradak is a role Steve plays on screen. All the heroic feats and adventures are make-believe. When Steve awakens he insists this is all a huge practical joke being pulled on him, until the adventure turns deadly.

Rista decides they will have to turn Kradak into the hero they need him to be to save Arkana from the encroaching darkness. The characters which inhabit Arkana are diverse, some are human like with differing talents, and some without. Then there is Grint, he is the shapeshifting goblin who was the buxom blonde who urged Steve to invite them back to his condo back home on earth.

Their trek is slow since they are traveling by foot, and there are twists that send the small group in a different direction, often for a good cause. Other times their path led them into mortifying situations. At long last they are finally in the town to meet the guide who will take them up to the monastery that keeps Lumina, the magic sword Kradak needs to battle the darkness. A huge wrench is thrown in the mix. Steve is angry and confused, and now he is wondering if he is even on the right side of this fight or not.

Kradak the Champion is the first book in this series and the foundation has been set up for the real quest to begin.  To find and stop Mikol who created this vast darkness. I felt like this book came to a satisfying conclusion.

Kradak the Champion is book 1 in Shawn Inmon’s, An Arkana Sword and Sorcery Adventure.