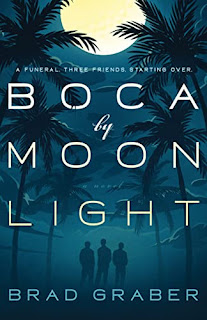 “Do men ever listen?

Are their friendships real?

How does a widower start over?

George Elden had it all. A lovely wife. Two beautiful adult children. A condo on the grounds of the Boca Raton Resort & Club. But when his wife dies, he's suddenly alone in retirement. A lost man. Sure, he has his golf buddies to console him, but when his friend Willy dies, George is caught off-guard. Why did Willy's family stay away from the funeral? Why did the check to the mortuary bounce? And why did George and his buddies have to pay to bury him? More importantly, what can George learn from Willy's life to escape making the same foolish mistakes?

From the award-winning author of The Intersect, After the Fall, and What's That Growing in My Sour Cream? comes a tale of redemption. The story of a man coming to grips with his mortality and the complications of human relationships. Told with the wit, humor, and emotional power that Brad Graber brings to his novels.”

Born in New York City with a career as healthcare executive in multiple cities across the US, Brad Graber currently lives with his husband in Phoenix, Arizona. He released three books prior to this one including another novel and an award-winning collection of essays.

This book's blurb has a line that pretty much sums the book up in one sentence. It says that this is “the story of a man coming to grips with his mortality and the complications of human relationships.” Most of those complications that George, the protagonist of the story, as well as his best friends are experiencing are because they’re at a time of their life where things are getting shaken up. Adapting to retirement, deaths, evolving relationships with his children, and the discovery that some people weren’t what they appeared to be are a sample of the things George has to deal with. I enjoyed the read, wondering how it was all going to work out, pulling for George to figure things out and find the way to ta good ending.

While I think anyone could relate to the story at a high level because life is constantly changing for most of us in various ways, someone who is middle-aged or even a touch older would be most able to relate to George’s story as they’ll recognize things they’ve gone through or observed friends go through, or at least be able to see the possibility of the same kind of experiences on the horizon for them. I sure can.