Review: The Devil You Know by Monique Singleton 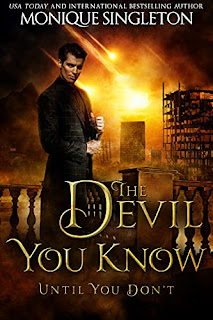 A rebellious “angel” and a murderous priest join forces to bring down “gods” stealing souls from Earth and selling them on slave markets in another dimension, presumably of the multiverse.

As the daughter of a British soldier and his Dutch wife Monique Singleton toured the world where she was exposed to the cultures of many countries. She settled in the Netherlands where she pursues a full-time career as a business consultant. Her series of books mix fantasy with “psychological suspense.”

The Devil You Know launches at MACH speed. By the time I paused for breath, I was well into chapter two and facing that terrifying question: “What’s it all about?” Religion’s false promise? Free will? If free will is such a big deal, why is absolute obeisance demanded by major religions? What’s this about religious adherents’ slavery? Religious hierarchy behaving as gods? The novel might not have the philosophical rigor of, say, Friedrich Nietzsche’s Beyond Good and Evil, but it touches on many of the same questions and is massively more fun.

British spelling with some strong language and several “F” bombs.

A few, but not so many as to detract from the story.