Review: The Coward of Grimsby by Eric Daniel Ryan 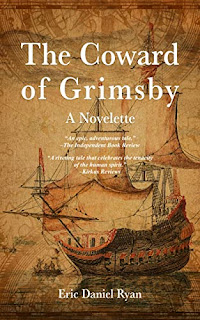 “In the final years of the Victorian era, a French fisherman and an English aristocrat team up on a harrowing adventure that brings forth an epic battle of greed, survival, and redemption.

In the port city of Grimsby, England, a down on his luck French fisherman named Georges DuFort meets Cornelius Braddock, a widowed aristocrat searching for a reason to live. Georges tells him the tale of a long-lost ship loaded with Spanish gold that disappeared off the African coast while on the run from the conquering armies of Napoleon Bonaparte. After Georges shares the treasure's secret location, the two men form a quick bond and begin to plan for the voyage of a lifetime. Things then take a turn for the worse when Georges mysteriously disappears on the eve of the journey and forces Braddock to embark on the treasure hunt without him.

After many months and thought to be lost at sea, Braddock washes up on the shores of France half-dead with a tragic tale of bloodlust and mutiny. Since he returns home without the ship or its crew, he is thrown into prison and blamed for their disappearance. Unable to convince the authorities of what really happened, Braddock is labeled a coward and a criminal for saving only himself and abandoning his crew to the harsh fate of the ocean.

Now, only Georges may hold the key to what truly happened on that fateful voyage and if the stories of the Spanish treasure were true after all. Will he find redemption for Braddock, or will the truth remain buried at sea? Find out in this gripping tale of a long-lost treasure and the lives it forever changed.”

“Eric Daniel Ryan and his family live north of Boston in the shadows of Old Salem Village, the Rebecca Nurse Homestead, and Lovecraft’s Arkham Asylum. After studying screenwriting and film production at the School of Visual Arts, he served three years in the US Army and is a combat veteran of the war in Iraq. In 2005 Eric became a Boston Firefighter and, in 2017, opened a business selling and collecting rare, original movie posters. Each night, after tucking the little ones into bed, he settles down in his two-hundred-year-old home to finish his first novel. His short story, The Orchid, was previously published in the anthology Portraits of the Pen by City Limits Publishing.”

A short, but intense read. This story has aspects of a thriller and a mystery, as well as historical, taking place long enough ago that most readers (or at least this reader) wasn’t sure what kinds of things we wouldn’t anticipate today that might have happened in that day and age. All of this worked to keep me interested and engrossed in the story.