Review: The Mary Jane Gambit by Sam B. Waite 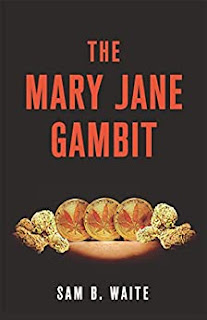 “This satire on crypto currencies sees a U.S. banking chain issue a marijuana-backed coin complete with credit cards and checking accounts as a true alternative to the U.S. dollar. The Mary Jane crypto appears headed for success until foreign powers issue their own stable coin intended not only to compete with the dollar but to crush it globally.

The dollar’s role as the primary currency for international reserves and invoicing gives the nation extraordinary advantage in the global economy, including its ability to impose economic sanctions for political reasons. Crypto currencies present a potential challenge that could play out in interesting ways. The Mary Jane Gambit was intended as a humorous look at what might become a quite serious issue.”

“Sam Waite spent thirty years of his career in Japan as a journalist for U.S. and Japanese financial news organizations and as a communications specialist for a global management consultancy. He joined the Marine Corps at age 18 and served one year each in Vietnam and Japan, where he began language study, which carried over to Asian studies at the University of Texas at Austin. He has an MBA from Texas A&M International. His other works of fiction, under pen names, have been published by Virgin Books, in English and German translation.”

Sam is also one of the Pals at BigAl’s Books and Pals.

Although satirical, I didn’t find the things that happened in this book to be too far over the top. I bought into what was happening the whole way. I not only got an intense and exciting thriller, full of unexpected twists, double crossing “partners” and globetrotting characters keeping me guessing about how it was all going to turn out, but learned a bit in the process.

In addition to the entertainment and tension I’d expect from a thriller, I learned a bit about cryptocurrency and how it functions. Those not familiar with the history of currency, the gold standard, and how that changed over the years will also improve their understanding of money as a means of value exchange.