Review: We Are but Warriors by Poly Iyer 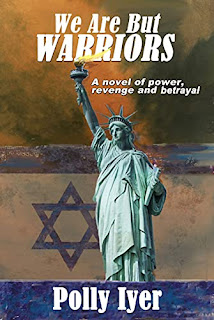 Genre: Political Thriller, according to the author’s description

An Israeli newspaper publisher, whose editorials call for equal treatment of Arab citizens of Israel as well as a Palestinian homeland, is targeted for assignation just before his address to the U.N. A super skilled assassination is pitted against a security firm run by a former U.S. Army General.

Poly Iyer has published “ten books of suspense and four sexy romances she writes under a pseudonym. She started out as a fashion illustrator and storyboard artist, importer, and store owner before embarking on her fourth, and last, career as an author. Her novels include: Hooked, InSight, Murder Déjà Vu, Threads, Kindle Scout winner Indiscretion, and four books in the Diana Racine Psychic Suspense series: Mind Games, Goddess of the Moon, Backlash, and The Scent of Murder.”

The author has strong opinions on Israeli politics and elements of the American Jewish community vis a vis Israel. Those ideas alone are worth the read. She describes a rightwing cabal fighting moderates in government. That sent me to an Internet search as I had thought Benjamin Netanyahu and his replacement Prime Minister Naftali Bennett would be rightwing enough for anyone. I found a Pew research report cited in The Times of Israel that said 79 percent of Israelis believe Jews should have favorable treatment over Arab citizens and that 48 percent favored expelling all Arabs from the country. I have a better understanding of the intransigence of the “Palestinian problem” thanks to Ms. Iyer. There are plenty of plot twists, and I expect enough romantic tension to satisfy a romance fan. As a political thriller, however, it is flawed. The author introduces an improbable plot twist at about the 80 percent mark. There is no set up, when it should have been central to the entire story. We are told that involvement of certain characters is needed for the new event, but without an explanation of why or how. Finally, political thrillers must nail the details. This story starts with a man whose leg is so badly mangled, he needs a cane just to hobble. Using his cane as a weapon, he disarms and defeats a highly trained assailant. Later, in a bar fight he renders three men unconscious. I was in the Marine Corps, Vietnam, have decades of karate training. It simply is not credible. In describing a kill by the assassin: “he threw his arm over the old man’s head, locking him in the crook of his elbow, and pulled tight against both carotid arteries until the frail body went limp.” Fine so far, but later the police report the victim had a broken neck. The choke described wouldn’t do that. As a sniper, the assassin loads armor piercing rounds into his rifle, but when he pulls the trigger, he shoots a hollow point bullet. Those are only some of the more obvious lapses in credibility. A pretty good story, but perhaps not for hard-core thriller fans.

Some strong language with a few “F” bombs.