Raising the Next Generation of Readers 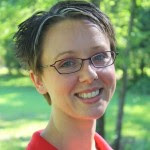 Today we have a guest post from author Leah Petersen

You’ve got a lot of competition these days. Kids have more to do than ever.

Mind you, I’m not of the we-walked-three-miles-to-school-uphill-both-ways generation. Technology came along in my day. We had computer games (so maybe they were DOS based,) cable TV, console games (Atari, anyone?), even handheld games (TETRIS!)

But I don’t think anyone’s going to argue that kids today don’t have much more, much cooler stuff than we did. And it’s everywhere. Kids are watching DVDs in the car, playing handheld games or games on their parents’ iPhones in line at the grocery store, even at the table in family-friendly restaurants. Everywhere there’s a TV. It’s insane.

So where, in all of this, are children ever going to pick up those non-flashy, black and white things called books that take forever to get to the end of, unlike the next level of angry birds?

The simple answer is, you have to be a mean parent. That’s right, you have to deprive your little darlings of unlimited access to all that other stuff long enough for them to realize how AMAZING books are.

Don’t get me wrong, this is a struggle. I’m raising my 2.5 kids through this time in history, and I know exactly how hard this is. And yet, my kids love to read. This was hugely important to me. I would have been devastated if they didn’t. So I put a lot of effort into it. Here are some of the things I did:

I was so terribly afraid that the changes in the world and the explosion of technology in our daily lives was going to take reading away from my children. Well, rest assured, it doesn’t have to. Just make it a priority.

Leah Petersen's debut novel, Fighting Gravity, was released earlier this week by Dragon Moon Press. You can get your copy directly from the publisher or from Amazon in either paper or eBook versions (paper or eBook for those who use Amazon UK).

Author JM Frey describes Fighting Gravity as "... touching, emotional, and a comfortably domestic love story set against the backdrop of politics in an empire that spans the Galaxy."

We've got to keep up the good fight, Leah!

Great post. I don't have children, but I have noticed the trends. I always wondered how parents, particularly those who write, were dealing with it.

It's hard, but important, I think. And totally worth it when they're so lost in a book they don't even hear you talking to them.

Thanks for having me, Al!

Thanks for the comments, Donna and tmso.

And thanks for doing it, Leah. I had a retired school teacher compliment me on your behalf elsewhere. I've seen my daughter use several of Leah's suggestions with my grandkids and it seems to be doing the trick. Letting them stay up late if they were reading in bed was one she used with the oldest which I especially liked once I wrapped my mind around it.

I think the second suggestion of reading in front of your kids is the most important.

Having grandkids who are readers has been great for me because it gives me an excuse to upgrade my Kindle with the latest model and pass my old Kindle to one of the grandkids. :)

Having grandkids who are readers has been great for me because it gives me an excuse to upgrade my Kindle with the latest model and pass my old Kindle to one of the grandkids.

Ok...I have a question.......would you still be devastated if you did all of the above and your children still were simply not interested in reading all of the time? I read constantly......I am also in the middle of. Writing what I hope to one day be a published novel. I have always read with and to my children, limit screen time, etc. When given the choices of things to do, they play board games, go outside to ride bikes, build with Legos etc. Very rarely if ever will they simply pick up a book.......I don't mind tho, because I think the other activities they choose are just as beneficial. I guess some people just don't enjoy books the way I do.

Ok...I have a question.......would you still be devastated if you did all of the above and your children still were simply not interested in reading all of the time? I read constantly......I am also in the middle of. Writing what I hope to one day be a published novel. I have always read with and to my children, limit screen time, etc. When given the choices of things to do, they play board games, go outside to ride bikes, build with Legos etc. Very rarely if ever will they simply pick up a book.......I don't mind tho, because I think the other activities they choose are just as beneficial. I guess some people just don't enjoy books the way I do.

How old are your kids? My son will be 11 tomorrow and he's the one who reads not just at night but during the day as well. But only when he has a good book. He might go a couple of weeks without any significant amount of reading because he's finished the last book and doesn't have another that interests him. We don't have a great library here so usually he and I have to cruise Amazon together to find him something new. I have a Kindle app on a Touchpad they can use, but he's not into ebooks.

My daughter is 8 and while she picks up a book from her bookshelf most nights after bedtime, she almost never reads during the day. There are other things that interest her more. But my son was that way too, when he was her age.

Devastated may be a strong word, but it would be a huge letdown for me if they didn't like to read.

That said, I've been a parent long enough that kids are their own people and, you can do your best, but no matter what you do, what they like or don't like in the end is up to them, and you don't get to dictate that.

I was holding off on answering until Leah had her say, but ...

I think all you can do is what you can to make an environment where reading is cool (yes, I'm old and can use that word). But they are going to be their own person. I'm sure my Dad wished I would have read less as a kid and been more interested in camping, hunting, and other things he was into.

I love to read, always have, and hoped to pass that love on down to my daughter. When my daughter was young, she didn't like to read. I think a lot of that had to do with the fact that she has dyslexia. But now that she is older, she is reading! It does my heart good to see her with a book in her hand and engrossed in the story.

I was one of those kids who hid their library books under the covers at night and read with a flashlight because I just HAD to know what was going to happen next in my book of the moment. I remember my daddy yelling at me to put that book down and go to sleep!

Well said. I have to admit, it was a definite bonding moment when my 15 year old step-son asked if he could borrow a book from my shelves to read in class. So far my 9 month old is more interested in eating books than reading them, but I figure it's a start. :)

Thanks Kristie. I think Leah did a great job.

Bob, a very good start. My youngest granddaughter has already started asking for a Kindle. She's only three. I told her to check back with me once she learns how to read. :)

I'm taking that as a good sign. Her mother reads to them several nights a week and she sees her older siblings, Mom and Dad all reading, and wants to join in the fun.

Terrific post, Leah! I agree with Al, the most important thing on your list is reading in front of your kids. Teenagers may poo-poo the idea of emulating mom and dad, but kids do copy their folks. Letting them see how much we love books is the best way to make them hunger for that same enjoyment. It worked with my two. They are now book loving adults.

It occurred to me when I was thinking about this earlier that lots of things I now do because of my parents' example when I was younger, I wouldn't have been caught DEAD doing when I was an adolescent or teen.

Sometimes the example just has cure for a while. ;)