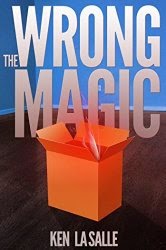 “Author and Playwright, Ken La Salle grew up in Santa Ana, California and has remained in the surrounding area his entire life. He was raised with strong, blue collar roots, which have given him a progressive and environmentalist view. As a result, you'll find many of his stories touching those areas both geographically and philosophically. His passion is intense humor, meaningful drama, and finding answers to the questions that define our lives. You can find out more about Ken on his website.”

“Good relationships take a certain kind of magic to succeed, and what Alex Petroya seems to have is the wrong magic.

After his wife Stephanie leaves, Alex has one place left to go: the pink house his parents left to him in Cambria, California. After moving in, he discovers a box filled with unfinished stories Stephanie had written during their marriage.

Could finishing them win her back? Alex decides to try but finds writing is harder than it looks. With help from his brother-in-law, Conner, he learns a simple incantation to increase focus. As Alex writes the stories, they come true, creating strange, unnatural events. Then he gets another idea: he will manipulate the stories further to make Stephanie return to him.

With the incantation and the stories, Alex seems to have tapped into a magical combination. But in the end, he finds there is no magic stronger than that of the human heart.”

Author Ken La Salle manages to write the most pathetic, self-absorbed, uninteresting, dull character and manages to keep him there throughout most of the story. Alex Petrova maintains his lack of growth by repeating the same mistakes over and over in an endless circle. His lack of foresight is untenable and disastrous.

The only saving grace he has available is his brother-in-law, Conner, and his childhood neighbors, Karl and Betty Ferguson. However he refuses to take any of their advice and proceeds with his own plan of action. Conner was a bit two-dimensional and Karl and Betty were stereotypical neighbors.

The way Alex’s stories affected his surroundings was outlandish, but entertaining. I kept feeling like surely Alex will see the light and change but he would fall back into the same role again repeatedly. Why he continued with the stories is beyond me. Except the last one when he decides to write his and Stephanie living happily ever after and that one was not touched upon nearly enough to satisfy me. Was all the magic of the prior stories undone? Did the neighborhood survive intact? I needed more and was left wanting.

I found a small number of missing or wrong words.