Reprise Reivew: All The Turns of Light by Frank Tuttle 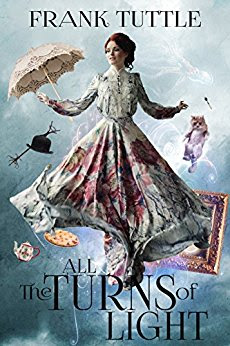 “Join Mug and Meralda as they take to the skies in the long-awaited sequel to All the Paths of Shadow!

The airship Intrepid, fitted with Mage Meralda's flying coils and bearing a crew of a hundred and sixty-two souls, sets out to cross the treacherous Great Sea. If the Intrepid survives the voyage, she will be the first craft of the Realms to ever reach the mysterious Hang homeland. But as Meralda soon discovers, storms and sea-serpents are not the greatest perils she must face. There are powerful forces opposed to the Intrepid's crossing, and the most dangerous foe of all may lurk deep within Meralda's own heart.

If you've a taste for airships and intrigue, magic and more Mug, then climb aboard the Intrepid and dare the vast Great Sea…”

“Frank Tuttle first began writing under the woefully mistaken impression doing so would release him from the burden of ever doing honest work. ‘It turns out writing is hard,’ said Frank as he pulled out great handfuls of hair. ‘That was never mentioned in Strunk and White’s Elements of Style.’ Frank’s first published works appeared in print magazines such as Weird Tales and Marion Zimmer Bradley’s Fantasy Magazine in the late 1990s. Since then, Frank has published eight Markhat novels and a variety of shorter works. Frank rarely resorts to hair-pulling these days, preferring to weep inconsolably while affixing his toupee.”

To learn more about Frank Tuttle you can check out his website. However, I suggest following his blog, it is always entertaining.  Of course you may also check him out on Facebook.

Meralda is a wonderfully intelligent young mage who refuses to compromise her character or magic. She also has the patience of a saint when given what seems like impossible demands from the King of Tirlin. Before liftoff of the airship, Meralda receives a warning message from Phillitrep’s Thinking Engine about the possibility of a final Cosmic Event that will be caused by her in the near future. The whole mission starts off with a series of mishaps that almost lead to devastation of the Intrepid before she even gets out of the hanger. Luckily, Meralda is able to keep a cool head and averts disaster.

The King is sure that the Vonat’s are out to sabotage the Intrepid on its maiden flight and takes extreme measures to thwart their efforts. When strange magical things start happening around Meralda, she slowly starts losing her grip on reality. It is all she can do to keep her head straight and maintain the Intrepid as chief maintenance officer. The last thing she needs is Mrs. Wedding Primsbite, chief penswift for the Tirlin Times, requesting interviews with her. Then Donchen, Meralda’s ever devoted ex-Hang boyfriend who stowed-away onto the airship, learns about an ancient Vonat prophecy that directly affects Meralda and everyone on the Intrepid.

The characters are all well rounded, the dialogue is outstanding, and the non-stop events on board the airship are suspenseful. Luckily, Mug is keeping a journal and is able to keep us up to date on all the other minor details at the end of each day. I loved that his cage now has its own flying coils and he can make himself mobile to travel around the airship as he pleases. He just needs someone to open doors for him occasionally. He is a wonderfully intelligent character that is full of snark and sees truths about Meralda that even she has a hard time admitting.

This is an exciting story full of adventure, danger, and untold magic that will keep you reading late into the night. Mrs. Primsbite turned into quite a unique character that I really enjoyed and I expect Meralda to keep her as a friend and confidant. She needs an older female figure around that she can trust in this male centric wizarding world.

Even though the Intrepid has succeeded in crossing the Great Sea there is still the mysterious Arc that Meralda feels she must find answers for. And the adventures in Hang territory are just beginning.

Format/Typo Issues:
I found no significant issues in proofing or formatting.