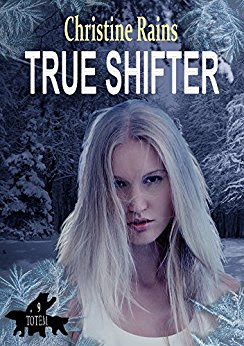 “Saskia Dorn can't bear to lose anyone else. But when the only man she's ever loved turns his back on her, she runs off to sacrifice herself to the totem quest.

With a disgusting kiss, a dying house spirit grants her the power to shift into any creature. Yet she has neither the time to train nor the imagination to utilize the gift to its fullest. How will she manage to defeat a villain who has mastered the ability and made her the person she is? Saskia only has a few freakin' hours to figure it out. After all, the fate of every shifter in the world depends on her victory.”

True Shifter, as far as I know, is the finale of the TOTEM series. And it packs a wallop! The tension and suspense ran high all through this novella. Saskia is faced with many challenges and conflicts, she’s intelligent and approached things in a logical manner. However, she is hard-headed, and still carries some insecurities. Watching her navigate the mysteries they are faced with to gain the remaining tokens is well written and enthralling.

Family and relationship dynamics play heavily in the plot as the story twists and turns back on itself. It turns out to be an emotional journey for the whole group. I was extremely satisfied with the captivating images painted by Ms. Rains, and the heart-warming climax of this series.

I’m hoping we get to hear further stories about the Dorn sisters and their chosen mates in the future. After all Lucky and Ametta need a new house spirit (domovoi) for the manor, and the kikimora, domovoi’s wife, has been charged with finding one. Then there is Berton Ellsworth, the vampire, who is inviting a water dragon to his castle. Seems like a lot of fun times ahead to me. :)

True Shifter is book nine in the TOTEM series. It is important to read this series in order as events build, and the characters grow through the previous books in the series.

Be warned, there are several F-bombs dropped.

I came across no significant issues in proofing or formatting.

The gal on the cover looks a tad annoyed.