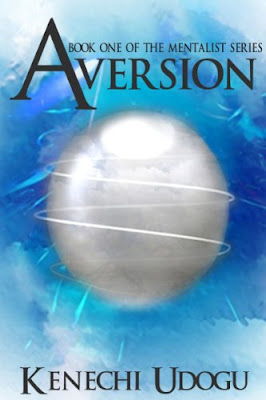 Gemma Green is an Averter whose job it is to stop people from making terrible choices. On her first assignment, she knows Russ, one of the most popular boys in school, will decide to drink and drive that weekend, maiming himself and killing the passenger in the car. Gemma successfully stops him with her powers, but something goes wrong and he feels drawn to her. That’s only the beginning of Gemma’s problems.

When I’m disappointed to put a book down because life gets in the way, I know a five-star book is in the making.

Recently, while I took the train into New York City, I started reading Aversion. After just 25 minutes, I was hooked on Aversion, but my train ride was also over … too quickly.

I loved the idea of this book where Gemma Green’s job in life is to stop people from doing things that could mess up their lives.

She’s been trained by her father, who is also an Averter. However, her first aversion doesn’t go as planned. Russ Tanner, a popular athlete, is about to make a horrible choice where he goes to a party, get drunk and gets into a car accident killing the passengers in his car. Gemma sees it before it happens and manages to push the thought into his mind that he shouldn’t go to the party.

Except when Russ comes up to Gemma at school on Monday and says hello. Gemma is an outcast and keeps to herself. There is no reason for Russ to want to talk to her, but he tells her that he felt compelled to do so.

Something is clearly wrong. Turns out that Gemma is the first female Averter in a very, very long time, and she thinks that may have something to do with it.

The book turns into more than just a budding teenage romance by adding intrigue with a paranormal touch. Questions that immediately come into play such as ‘Why is Gemma the only female Averter’ and ‘What went wrong with her first aversion,’ are clearly answered during the course of Aversion. The best part, the answers were satisfying.

While the book doesn’t necessarily end with a cliffhanger, there is certainly room for more stories to come out of Kenechi Ugodu’s world.