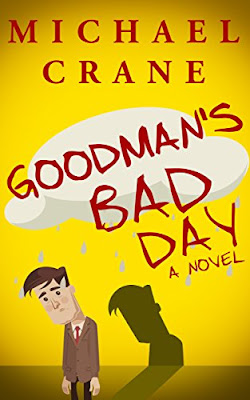 “After being let go from his lousy job and finding his wife in bed with another man, Benjamin hits the bar, wondering what else could possibly go wrong—unaware he’s about to have one of the worst days of his life.

‘The universe is playing a series of cruel and unfortunate jokes on you. More jokes to follow.’

That’s what’s printed on the card Benjamin Goodman receives from a strange, drunken homeless man he meets at the bar.

In this dark comedy of random and absurd situations, Benjamin Goodman’s about to get one hell of a wake-up call that he so desperately needs. Everybody has bad days. Sometimes they can make or break a person. If Benjamin wants to get through his horrendous day in one piece, he’ll have to do the one thing he’s been afraid to do his entire life.

He’ll have to stand up for himself.”

Benjamin Goodman is certainly having a bad day, which turns from bad to worse as the day goes by. It becomes pretty obvious that Ben was raised in a dysfunctional family environment, he is extremely passive and feels like he deserves to be miserable. He is the saddest and most pathetic human I have read about in ages. The deplorable hobo who shows up in the strangest places reminds me of a dysfunctional fairy godfather, who seems perfectly fitting for Benjamin.

The storyline seemed a little slow, for me, at times and perhaps a little repetitious.   However, looking back I can see how each event helped build the impetus needed to push Benjamin in the direction he needed to go. Mr. Crane wove in humor and absurdity as we follow Benjamin throughout his day.
The ending is strangely satisfying and I hope Benjamin doesn’t have any more bad days in his future for a long while. The man needs a break.