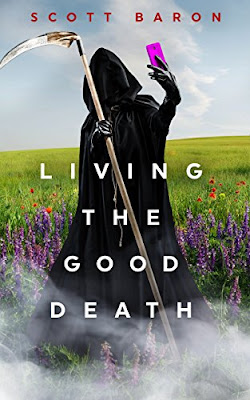 “Have you ever had one of those days? You know, the kind of day when things just don’t go your way. Like when your botched suicide attempt and claims of supernatural powers get you hauled to the emergency room, placed under observation, then transferred to a locked-down psych facility.

The girl who thought she was Death had failed miserably in her efforts to shed the troublesome human body in which she was trapped. The result? Finding herself surrounded by nutjobs, locked in a mental ward ruled by a humorless doctor with a Napoleon complex and a penchant for sleight of hand. Sure, she did technically bring it on herself, but how was she to know that trying to off herself in public and using her outside voice to proclaim she was Death incarnate would result in a psych ward lockdown?

With that problematic little blunder behind her, the concerns now vexing her were pressing. Escape, both from the mental hospital, as well as from this plane of existence, was vital, but equally so was addressing the other issue haunting her. The big one. The one that could end the world. The issue that with Death missing, people would rather inconveniently no longer die like they were supposed to. Eventually, things would hit critical mass. She just didn’t know when.

The situation was, well, grim, to say the very least. An irony not lost on the girl claiming to be the Death.”

The girl who thought she was Death is having a very bad time. She has no idea if she has done something wrong to be banished to a human form when she awakens on a dirty carpet in a low rent motel with a foggy memory. She has tried to off herself in different ways and fails miserably each time to die. Her last attempt was the most horrific and landed her in a not so modern psych facility that needs patients to maintain their bottom line. It often frustrated Doctor Vaughan, head of the institution, to work inside certain reputable guidelines. He assigns the girl who thought she was Death the name of Dorothy who is an escapee from a facility out west.

The cast of quirky characters inside and outside of the institution are well developed and diverse. The story is unique, mostly entertaining, and a bit dark. There are a few times non-vital information was repeated, which made the story quite wordy. I felt like Randy and Andrea were cheated by being used as pawns in the story. And who the hell was Curtis? Was he a pawn as well, being used by a higher power to teach a lesson to Death? As you can probably feel by now I was a little disappointed in the way the story played out in the end. But that doesn’t mean it’s a bad story. This is just my opinion.

There are a few F-bombs.