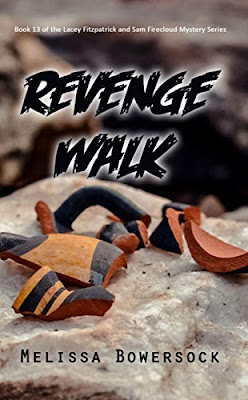 “Paranormal investigators Sam Firecloud and Lacey Fitzpatrick are preparing for a new venture—launching Sam’s ceramic art studio with an open house. Their plans are suddenly derailed when someone targets Sam with deadly intent. The LAPD are on it, but leads are slim, and meanwhile they have a new haunting to research, one that is threatening small children. Neither investigation gives up clues easily, but Sam and Lacey have to keep working both before someone ends up dead.”

Sam Firecloud is fully committed to his new business venture to continue his grandfather’s love of making traditional Navajo pottery. Lacey plans an open house to publicly highlight his talented work. During the same time frame Lacey receives a call for help from a new homeowner. They have been co-existing with a mournful ghost, who has recently started to threaten their young daughters.

Both Sam and Lacey feel the ghost terrorizing the children is a top priority. When the first releasement of the sorrowful ghost didn’t release her from the house, Lacey commits to dig deeper into the facts of the case and contact the previous owner’s daughter. I think this is the first time I have seen Sam stumped. Then the open house hits a huge snag with a mystery of its own. It’s amazing to me how Ms. Bowersock seamlessly weaves together these two very different story arcs. The ghost’s story is indeed a grievous situation, which surprisingly comes to a heartfelt ending I didn’t see coming.

While the open house finally happens on schedule, there were some tense news-worthy moments when Sam’s house ghost warns him of impending danger. Sam psychically hones in on the danger and goes after the problem. Shots are fired and Lacey has to shuttle the guests into a safe part of the studio away from the shattered picture window. Sam’s son, Daniel, plays a key role that keeps Lacey from crawling out of her skin.

If you love your mysteries with a paranormal twist and you haven’t started reading this series, you are sorely missing out on some well told, exciting mysteries.

I read a beta copy so I’m unable to judge the final product in this area.