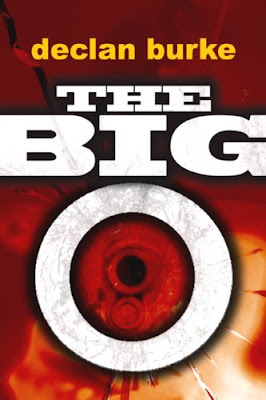 By day Karen works for disgraced plastic surgeon Frank, by night she carries out armed robberies. Whilst holding up a store she meets Ray, who also has two roles – mural painter and kidnapper.

Frank lives the high-life, but he’s bankrupt. He needs a lot of money, and fast, to resolve his many problems. So he employs local crook Terry to kidnap his ex-wife, Madge. The plan – get an insurance payout for $500,000 and jet off somewhere hot.

The trouble is Madge is Karen’s best friend and Ray is the one who’ll be snatching her. Throw psychopath Rossi, fresh out of prison and gunning for Karen, into the mix and things are going to get very messy, very quickly…

To learn more about the author visit his website.

Two comments before I start this review:

1)   I’ve clearly been living in a hole for the last few years as this was my first experience of Mr. Burke’s writing.

2)   I have a very short attention span.

Number one is now corrected (thankfully) but number two is a permanent affliction. I get bored easily, I find it hard to stick with long books that don’t grab me by my throat in the first couple of pages, I physically groan when I see the book size measure on the kindle screen going off the scale.

So when I start The Big O, I don’t know of Mr. Burke and the book looks huge. Oh dear. But this is the opening paragraph:

In the bar Karen drinking vodka-tonic, Ray on brandy to calm his nerves. Karen told him how people react to death and a stick-up in pretty much the same way: shock, disbelief, anger, acceptance.

Then Karen goes on to describe how to carry out said stick-up, it transpires this is how she met Ray (having nearly shot him). And so within a couple of paragraphs we plunge headlong into a whip-crack smart novel that barrels along at high pace that simply compels me to finish it. For the next couple of days I’m stuck with my nose in my kindle, much to my wife’s disgust as she wants me to get stuck into dreaded DIY instead, but I’m simply too absorbed by the characters and their activities to do anything else but read.

In short I thoroughly enjoyed The Big O and was disappointed when I finally put it down, simply because the joyride was over.

This is a very cleverly plotted, character driven novel. There are relatively few characters but all are very strong, have flaws (to varying degrees) but display hidden depths that are gradually revealed as the narrative progresses, adding to it.

The action is split into seven segments – the week long period over which the snatch is planned and occurs. These segments are then broken up by short chapters (which keeps the pace high) each headlined with the particular person whose perspective it follows – the narrative is modified accordingly. The prose is economic, very sharp and strongly dialogue driven.

What I really liked about The Big O and that set it apart from the pack was that initially the story seems well sign posted, i.e. it appears obvious what’s going to happen next, but Burke was simply lulling me into a false sense of security before throwing me into a tail spin with a twist. This happened on numerous occasions. In the end I gave up guessing – hence the joyride.

For example, Anna. I had a concept of who the character was and how they fitted with the others, but I was completely wrong (I won’t say any more so as not to give it away). Then there’s the snatch, again the cards fall in a completely different way to how I envisaged they would. It’s very, very well done.

Overall a thoroughly enjoyable, clever and well plotted read that simply makes me want to find more of Burke’s work.