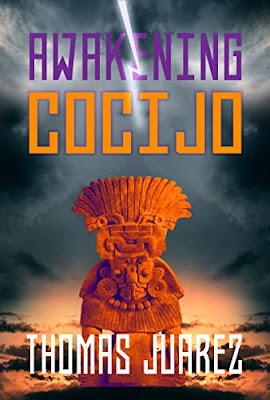 Can a boy quell the fury of a god?

Join the Zapotec on a journey through time and across generations, as the descendants of this civilization are led on a path of transcendence.  The rebirth of their storied civilization depends upon their ability to awaken Cocijo, the god of lightning and rain.”

“With roots set in Germany and Texas, Thomas (Tom) Juarez grew up enjoying the life of a military dependent. Living in multiple states and countries, his family would finally settle down in the beautiful city of Wetumpka, Alabama; a place Tom still refers to as home.

Filled with a sense of service, Tom would leave Wetumpka in 1985 for a twenty-one-year career in the United States Army… After a lifetime of moving here or there, Tom called it a career and retired from the military. He and his wife enjoy the fruits of their collective journey in Sterling, Oklahoma.”

Part one of this journey begins in ancient times. Following the initiation of a young Priest and his transcendence to adulthood of mythic proportions. This sets up the legend behind the story and I found it fascinating. Part two moves forward to a more modern time. The summer of 2003 in Fort Sill, Oklahoma. Here we meet Agent Gustavo Hamilton, a clairvoyant with the US government, and Staff Sergeant Citalli Patee, of Hispanic descent. Agent Hamilton recruits Citalli to help him prevent an international incident that he had a vision of which included Citalli.

After a metaphysical experience in Oaxaca, Mexico, Citalli and Gus develop a lifelong friendship with mutual respect. Part three jumps forward ten years to Taugui, Oklahoma where he meets Citalli’s ten year-old son, Canneo. Canneo has been raised knowing the old ways and legends, as Citalli was. Canneo has started having dreams of things to come. His rite of passage into adulthood and introduction to the old gods follows.

I liked the relationship and dialogue between Citalli and Gus. Citalli has a quirky sense of humor, you couldn’t help but like him. Citalli’s wife, Kara, kept him grounded so they were a perfect match. Gus is a character that takes a bit of time to get to know, but he settled in with the whole family well.

Citalli’s dead mother had a heavy load to carry. During Citalli’s prayer time she explained their religion and their relationship to the gods. It seemed a bit repetitious but I can understand why the author did it. It is a lot to take in. This is a work of fiction and loosely based on Zapotec history, not a history lesson. I did enjoy the story and it was worth my time to read. If you are interested in Mesoamerican cultures you may enjoy this story as well.

A small number of proofing issues, nothing that threw me out of the story.