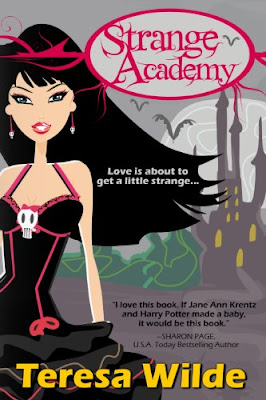 “Determined to uncover the secret behind her eccentric aunt's mysterious death, Sadie Strange, a quirky substitute teacher with a Master’s degree in comic book superheroes, takes a job at isolated private school Strange Academy. Her biggest obstacle? Haughty hottie Lorde Gray, the chemistry teacher who looks down his Roman nose at her as he tries to get her fired.”

“By day, Teresa Wilde is a mild-mannered technical writer, but by night (and lunch hours, and weekends) she's a digital Sheherezade, weaving tales of strange and wondrous places and people.”

This book caught me a little off guard; I assumed by the cover it would be a light-hearted funny read. And it was that, but it was also so much more. Ms. Wilde did a wonderful job building her characters and exploring their backgrounds so we understood why each one was the way they were. Knowing the psychological makeup gave her characters depth and a more human quality making it easier to identify with them.

Lorde Gray was a character that was hard to like at first. He was egocentric, overbearing, and controlling. The perfect alpha male type. But as the story develops and we get to know more about his history he becomes quite swoon-worthy. However he has a lot of pride and Sadie becomes quite adept at challenging his pride which was fun to watch.
Most of this story deals with the teachers and administrators of Strange Academy instead of the students, so the theme is more adult oriented. Although two of the students in Sadie's class have a larger role than most. Sterling, Lorde's eleven year-old nephew, and Carmina, a Non (a human without a talent/power) who may never have talents, develop an interesting friendship that challenges the House of Gray. Sadie and Carmina also develop a relationship being the only two Non-talented humans at Strange Academy.