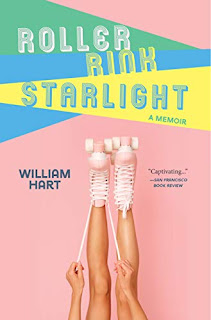 “William Hart’s true coming of age memoir begins when at fourteen he joins an amateur roller racing team comprised of both sexes and loaded with RSROA national champions. A varsity sprinter in track, he soon excels at speed skating.

The main storyline follows Hart’s early education in romance—piquant, humorous, harrowing, and laced with major life lessons. The setting: Wichita, Kansas, early 1960s, when the sexual repression of the 50s still prevails, except in rare zones of marked liberation. Adults have their watering holes, teens the rink, where they can experiment with their budding sexualities. Immersed in powerful mood music they glide in pairs through darkness under stars and make out in the bleachers. Falling in love is ridiculously easy, as we see in the adventures of teammates, parents, and certainly the author. Hart fell hard for a gifted racer, his kindred spirit, costar of many of his most indelible memories.”

“William Hart is a novelist and poet living in Los Angeles. He writes while helping produce the documentaries of PBS filmmaker Jayasri Majumdar, his wife. Hart's work has appeared in several hundred literary journals, commercial magazines, newspapers and anthologies, and fourteen books.”

This was an enjoyable read. In some instances, it brought back memories for an old guy like me. Yeah, I hung out at the roller rink in my town a bit. I may not have done so as often as William Hart, the author of this memoir, and it was a decade later, but many of the experiences he recounts still felt familiar. Some were different (I was definitely not athletic or involved in organized racing at the rink) but reading about his experiences were still interesting.

In fact, in some ways reading about experiences that were different from my own was more of a positive than any flashback I had. At one point in the book the racing team had gone to a racing competition in another town that was unfamiliar to most of them. The author mentioned that visiting other towns was an education to many of them, saying that there is “something about spending even a day in an unfamiliar town that can open a young mind to life’s possibilities.” This is something I’ve recognized as a positive of travel in general, but it struck me here that when you’re young and inexperienced the place you go doesn’t have to be very far away to feel a lot different. I like reading memoirs for the same basic reason, but instead of putting yourself somewhere different physically, it allows you to put yourself in someone else’s body and mind, seeing the world through their eyes. Both are learning experiences that benefit the reader while also being an enjoyable activity. I’d recommend this book to those of you of a certain age, if you’re interested in going back in time like I did. But for those who are a bit younger than William Hart and myself, it gives you the chance to put yourself in someone else’s shoes for a while.