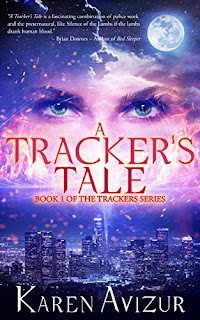 In Katherine’s world, werewolves, vampires, púcas, and other parasapien species – forced for centuries by human fear and prejudice to live at the fringes of society – have finally come out of hiding to demand their rightful place alongside us. Within the FBI’s unit that handles parasapien cases, the Trackers division, Katherine Colebrook is one of the best. Her psychic abilities made her a natural, allowing her to move between the parasapien and human worlds in ways that no other agent could. But Katherine’s calling hasn’t come without struggle and losses along the way.

As a single mother, she must contend with her teenage daughter, Alexandra, who not only shares Katherine’s psychic abilities, but seems determined to follow the same dangerous path as her mother. And so, when Katherine’s latest assignment threatens to bring that danger too close home, she finds herself faced with the toughest challenge of her career: Can she protect her daughter’s life, while battling a ruthless adversary who’ll stop at nothing to destroy her?”

“Karen Avizur grew up on Long Island, New York and ended up in Orlando, Florida, with stops in Connecticut, West Virginia, and Los Angeles along the way. She's been writing stories since she was twelve years old. In those early days, she discovered it was impossible to keep up with her thoughts by writing longhand, and ended up borrowing a 7-pound laptop from her dad, quickly honing her typing skills.

After graduating film school, Karen moved to Los Angeles, where she worked as a film editor for several years while also pursuing her writing. ‘I was taught that a film editor is really the final-draft screenwriter. It’s true’ she notes. ‘I’d written much of Trackers as separate short stories over the years, but being an editor helped me see how to weave those stories together into novel form.;

Karen now lives in Florida with lazy dog Ginger (her Australian cattledog mix), and still keeps a hand in editing for special clients.”

The police found Rebecca alone in a diner, rocking to and fro afraid and mumbling.  The doctor admitted her to the mental ward of a children’s hospital. The nurse on duty, a friend of Katherine’s, thinks Rebecca may be psychic, however, she is also a high functioning autistic teenager. Someone is trying to kidnap her. When Katherine learns her older brother was killed trying to protect her, Katherine askes for a quickie adoption from the FBI, so she can protect her.

It doesn’t take long before the fists and feet start flying, races against the clock ensue, and training a new partner begins. Of course, politics finds its way into the story of Werewolf society, Vampire hierarchy, and Mob bosses. Which all requires Katherine’s special touch. It’s all edge of your seat intensity with surprising twists and turns. It’s no holds barred when Katherine get fired up, her stamina wore me out reading about all the action. All of the story arcs are brought to a close except the mystery surrounding Rebecca’s past and her nightmares. Then in the last chapter two new characters are introduced who are connected to Rebecca. Luckily book 2 of this series is published.