Review: Ain't That a Kick in the Head by Nigel Bird 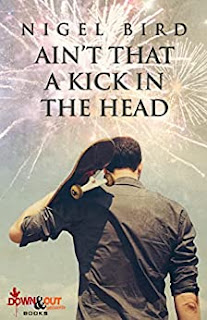 “This year, the fireworks will be red hot…

Skates Farrington is a changed man. Gone are the smart suits, the dull meetings and the extra pounds. Nowadays, he gets his thrills at the skate park and from whatever substances his dealers send his way. The only thing missing from his life is his ex-wife. She’s shacked up with a respectable partner in an isolated farm and striving to create the perfect life. Skates is convinced that she will come back to him when she sees his new self, but when attempts to win her heart all over again are thrown back in his face, he decides a little gentle persuasion is in order. Now he can include murder and abduction among his new-found skills.

DI Oliver Wilson, leading the investigation, has more than a few things on his mind. The case and imminent arrival of his third child should be at the forefront of his thoughts, but the arrival of a sequence of unusual gifts is making him nervous. The packages are sending him a message, he just can’t work out what they’re trying to say.”

Nigel Bird is a Scottish school teacher as well as a writer of fiction. He has several novels available and has had his work appear in numerous magazines.

As I was pondering this book something occurred to me that I don’t remember considering before. Specifically, the different things that a story may or may not have and how those different approaches keep a reader engaged in the story. In this case I was thinking specifically about the difference between a mystery or a lot of stories that, like this one, have some main characters who are police detectives trying to solve a crime and how those compare to stories where the reader knows who committed the crime early in the story. Here we know who committed the crimes in question when they happen or even before (the book description spills the beans).

What keeps the reader engaged isn’t figuring out who did it, but wondering whether those who don’t have those answers are going to figure it out and stop the criminal before he does more. That threat of more crime keeps the reader engaged. That’s what happened to me here. What Skates was going to do, just how far he’d go, and what damage he was going to cause was never clear. The answer to that question kept me wondering and engaged in the story.

Although this is book #3 in a series it can be read as a standalone.

This review is based on an ARC (advance reader copy), so I can’t gauge the final product in this area.