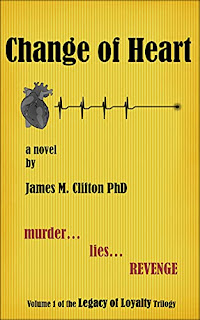 “To what lengths would you go to ensure that your family can afford a good life? Would you commit a crime? Would you trade your life for their future? These are not academic questions for John Cooper. After losing his business and reaching the brink of bankruptcy, he decides that he’s worth more dead than alive and attempts suicide so that his pregnant wife will have the insurance money.

Two thousand miles away, another man contemplates a different question. He’s dying and needs a heart transplant. And he needs it soon. Where can he get the new heart that he so desperately needs?

What connects these two men is an extremely rare blood type, a type that only one-in-a-million share. John Cooper has the heart that Jimmie Regan needs. And, as one of the biggest drug lords in the world, Jimmie Regan has what John Cooper needs—lots of money.

At first, they come to an amicable arrangement, one where both get exactly what they want. But everything changes when John holds his newborn daughter for the first time. Unfortunately for John Cooper, Jimmie Regan is not the kind of man that accepts disappointment. What follows is a desperate chase across southern Mexico, a betrayal of a husband by his greedy wife, and an alliance of unlikely conspirators including Carlos and Lena Ramirez, the son and daughter of the man that Jimmie Regan murdered in order to seize his criminal empire.”

While classified as crime fiction Change of Heart has other things going for it than the typical crime fiction. The protagonist, John, isn’t the typical criminal protagonist. His goals and motivations which evolve as the story continues were something I had no problem understanding and it was easy for me to pull for him throughout the story. The various surprises and unexpected twists in this tale kept me engaged and pulling for things to workout for John.

“Change of Heart is volume one of the Legacy of Loyalty trilogy. Volume two, Penance, is the story of Carlos’s desperate plan to ease his stricken conscience in the aftermath of the death and destruction caused during the struggle with Jimmie Regan. Volume three, Loyalty, is the story of Lena’s battle to secure the long-term safety and the future of her extended family.”

A few minor errors, but not a significant amount.