Review: The (Un)lawful Killing of Daniel Brown by Marta Pacini 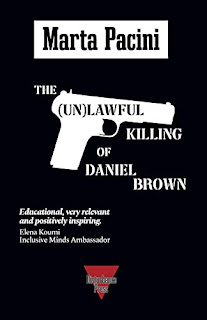 “The (Un)lawful Killing of Daniel Brown is a gripping YA book set in contemporary East London.

Marcus, 15, wants to bring Police Sergeant Talbot Blair to justice for shooting his father dead in a racially motivated incident. But how can he do that when the police investigators have cleared Blair of blame? Will an inquest make any difference?”

A resident of Lancashire, England, Marta Pacini describes Disturbance Press, the publishing company she’s founded, as a “radical independent publisher.” Based in the UK, this company is aiming to bring stories with a focus on social and environmental justice to the “mainstream reading culture” and describe themselves as “unapologetically leftist.” This is Pacini’s first book with a second one slated for release in June of 2022.

Just before he arrives at the garage where his car mechanic dad’s business is located, Marcus Brown observes a policeman shoot his dad who appeared to be cooperating fully. The police say otherwise, claiming that his dad pulled a gun on them and they had no choice but to shoot. Marcus knows this isn’t true and when he hears the story about why the police were visiting his dad in the first place, it makes even less sense. The reaction from Marcus’ mom is hard to figure out. She seems willing to just let things lie, either not caring or, more likely recognizing the futility of trying to do anything about it. But Marcus, convinced that dad died only because he was black and the police were too quick to shoot in that situation, isn’t willing to ignore what happened.

Following along with Marcus as he figures out what to do and how to approach it kept me engaged. That he was obviously in the right had me pulling for him the whole way. I realized as I was reading that the legal system in the UK is enough different from the US that my uncertainty about where things would end up was adding to the mystery and suspense. A very good read.

Review is based on an advance copy, so I can’t gauge the final product in this area.

Email ThisBlogThis!Share to TwitterShare to FacebookShare to Pinterest
Labels: 5 Star, Political Fiction, YA