Review: When It Rains by Mark Allan Gunnells 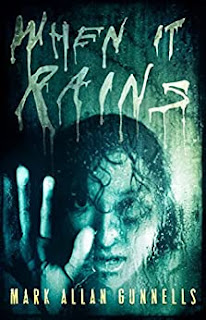 “When the rains started to fall, those who took shelter in the Friedkin University bookstore had no idea what awaited them. The mysterious, slimy rain fell on the entire world at once, and a fear quickly spread that it contained a toxin that would make those who touched it sick. Inside the bookstore, tensions arose between those who had been caught out in the rain and those who had not, finally culminating in a shocking ending that will surprise and disturb readers.”

“Mark Allan Gunnells loves to tell stories. He has since he was a kid, penning one-page tales that were Twilight Zone knockoffs. He likes to think he has gotten a little better since then. He loves reader feedback, and above all he loves telling stories. He lives in Greer, SC, with his husband Craig A. Metcalf.”

This novella was an adventure in that I wasn’t sure where it was going, only that I wanted to go along to see what happened. The premise, that kicks it off, that a slimy rain starts falling and a bunch of people take refuge in the Friedkin University bookstore seems like science fiction. However, as we get into the story, we discover that this same thing happened before, specifically in Oakville, Washington on August 7, 1994. What caused it was never determined. Any side-effects, good or bad, were never identified from that event. Plus, there is one big difference here, the storm (or deluge as it becomes referred to), in this case starts in a few places, but quickly spreads all over the world. So, while fiction, it isn’t as out there as my first impression led me to believe.

However, ultimately the deluge is the cause for the real story here, how people react to being stuck in the bookstore, not knowing why the deluge is happening, when it might stop, and maybe most critical of all, are those who were exposed to it, getting “rained” on before they sought shelter, in danger. Or might those people cause danger to others, the theory that the slime might make those who contact it diseased or an equivalent as well as potentially contagious to those who were exposed.

It doesn’t take much imagination to compare what is going on here to what has happened during the Covid pandemic, with the story almost feeling like a bit of a mirror on society. Curiously, it felt like people that I’d perceive as taking certain stances based on my impression of them, as well as the stance I was instinctively taking myself on how people should react, was the opposite of what the Covid pandemic would have led me to expect. Probably needless to say, that got me thinking and evaluating why I was reacting that way. Ultimately, I think I figured it out for myself, but the self-searching was definitely a positive of reading the book, not to mention keeping me, at least figuratively on the edge of my seat the whole time. And then there was the ending, not what I’d have guessed at all. See if you agree.

My review is based on a pre-publication ARC (advanced reader copy), so I can’t gauge the final product in this regard.