Review: It Takes an Oni by Scott Rhine 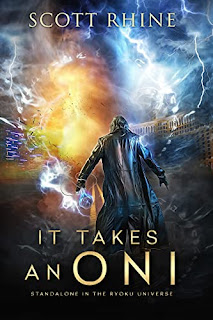 “Solomon Oni has taken a commission to rob (sic) something of devastating power from the Smithsonian’s religious artifact vault. His only friend, other than a magical tattoo artist and the odd djinn, is a young misfit witch named Morgan. When supernatural thugs threaten her, he demonstrates just how much a former servant of the underworld can do to punish the wicked.”

“Scott Rhine wanted to find a job that combined his love of reading with math problem solving, so he studied both short stories and computer languages. When his third publication, Doors to Eternity, hit #16 on the Amazon epic fantasy list, he decided to become a full-time author. Since then, each book of his Jezebel's Ladder series hit the high-tech science fiction top 100. His medical thriller, The K2 Virus, is his highest-rated novel. His latest books are witch academy stories written for his teenage daughter.”

This tale of monsters and magic begins with a fib. “However, instead of working to punish the wicked, I became one of the wicked,” spoken by the narrator Solomon Oni about himself. He is in fact a soft-hearted uncle figure, who is so sensitive that he goes to physical pain to disguise his ugliness. His wickedness comes down to thievery, but literature abounds with noble thieves from Robin Hood to Jean Valjean. Solomon’s objective is to steal a magical object on behalf of the Drinking God. How more noble can one get?

The narrative may be stronger as a love story than a fantasy crime caper. “She doesn’t have to love you back or even talk to you,” says the “wicked” Solomon to his disciple, who adores a girl under the oni’s protection. Replies the disciple: “I have to be there to see that flower open, even if she wakes up and realizes I’m not worth her time.” Selfless love is something the world could use a great deal, even an iota, more of. Solomon himself is so besotted by his love interest, the girl’s mother, that he scarcely dares touch her least he be overcome and reveal his true visage.

At least, I think that is what is going on. I found the narrative too baroque. Magical powers pop up without support from an underlying logic. Minor characters appear, often unexpectedly, without benefit of background, introduction, or often as not, even purpose. “Already taken care of,” I assured her. “I texted your surveillance team too.” Where’d that team come from? Who are its members? What are their capabilities? What exactly is their objective? There is no other mention of the team, so why inject it? A good bit of writing, such as a description of an ESOL class, are asides that do not advance the story.

Even a fantasy needs accuracy in real world references. A bit persnickety perhaps, but I was bothered by: “Then, I texted a contact at a Zen monastery to order a saffron priest’s robe in his size.” Zen monks wear black, not the saffron of Thai and other Buddhist monks.

It Takes an Oni may still be an enjoyable read. Like a good PI novel, it is driven by characters more than plot. The characters are likeable and interesting, and this reader wants them to win.

Not suited for young readers

I read about half of it. It's like a bunch of short story episodes turned into a novel. There's a lot of tough guy talk and a sort of gentleman's creed to some of the stories, but it's not consistent. Overall not smooth enough for me to finish, but part of that was because of the ridiculous sex scene and then the way women were portrayed. Even teenage girls know to put their pants on before appearing at breakfast. None of the women were admirable, at least in the first half.